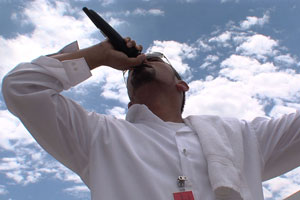 Last week, Independent Lens hosted its first social screening on the Independent Lens Facebook fan page with an exclusive sneak peek of the upcoming miniseries, The Calling. Led by Series Director and Executive Producer Danny Alpert, the four-hour documentary series follows seven young people on a dramatic journey as they train to become professional clergy. The online screening was followed by a special live panel discussion from the studios of the WTTW in Chicago featuring all seven subjects. The 90 minute webcast reached viewers from more than 55 countries and was accompanied by a live chat on Facebook and Twitter. Below, you can replay the event and conversation:

Leading up to the film’s upcoming PBS premiere, the What's Your Calling? Campaign, an online initiative, was launched to give others a platform to share types of service they have been called to and how they hope to change the world. From tug-boat artists to jazz musicians, the campaign has conducted a host of interviews exploring the notion of a “calling” from both religious and secular perspectives.

And as part of Community Cinema The Calling has been playing throughout the month of December in cities across the U.S. You can still make some of the screenings, so check out the calendar here.

Enjoy these excerpts from the filmmakers responsible for covering all the subjects profiled in the film, including: Directors Yoni Brook, Alicia Dwyer, Musa Syeed, Maggie Bowman; Co-Producer and Editor Susanne Suffredin; and Co-Producer Beth Sternehimer.

Catch The Calling when it premieres next week on December 20 and 21 on Independent Lens (check local listings).