The FUTURESTATES shorts will be streamed live through ITVS’s new social video player starting on Thursday, April 26 at 5pm PT / 8pm ET with a screening of Charlie 13 followed by Gunny. Filmmakers Michael McMillian (Charlie 13) and Patrick Stettner (Gunny) will be chatting live to discuss their film and take your questions. 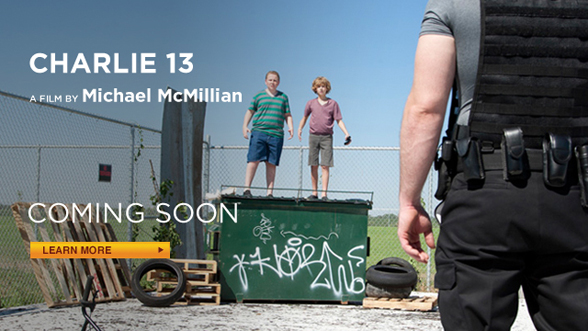 About Charlie 13 On the eve of his 13th birthday, will Charlie Tuttle submit to a government-mandated tracking implant, or answer a more dangerous call to adventure?

About Filmmaker Michael McMillian Michael McMillian’s film and television work includes playing Reverend Steve Newlin on HBO’s True Blood and leading roles in Dorian Blues, What I Like About You, and Saved. Other credits include Veronica Mars, The Hills Have Eyes 2, Big Love, The Mentalist, and Firefly. McMillian co-wrote and produced the award-winning short film Glock, co-wrote the full-length feature film The New Life, created and wrote the graphic novel Lucid, and co-wrote True Blood: Tainted Love.

About Gunny A young female soldier returns home after a traumatic tour of duty, taking a new medication that can selectively erase memories.

About Filmmaker Patrick Stettner Patrick Stettner’s feature filmmaking credits include the award winning and Sundance Lab-developed The Business of Strangers, starring Julia Stiles and Stockard Channing, and The Night Listener, starring Robin Williams and Toni Collette. He has won numerous awards from the Paris Film Festival and San Francisco International Film Festival and two awards at the Palm Springs International Film Festival for his thesis short, Flux. In addition to filmmaking, he teaches directing at his alma mater, Columbia University.

Follow this link to the screening of Gunny with filmmaker Patrick Stettner.