Currently airing on public television nationwide, This Is Where We Take Our Stand documents an unprecedented 2008 conference of veterans and active-duty soldiers called Winter Solider. Inspired by the 1971 conference of the same name, the four days of heartbreaking testimony revealed why many veterans of the Iraq and Afghanistan wars concluded that their mission was unjust. ITVS’s Kate Sullivan Green spoke with Director/Producers David Zeiger and Bestor Cram about the film and its relevancy today. 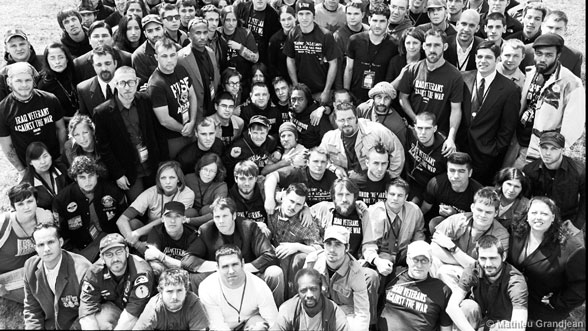 Your film takes place around the Winter Solider event in March of 2008. What drew you to this subject?

DAVID ZEIGER: I made a film in 2005 called Sir! No Sir! that told the story of the G.I. movement against the war in Vietnam. This was a story that had been deeply suppressed in history and in the American psyche and had been replaced with a whole mythology that said that during the Vietnam War, the anti-war movement had targeted soldiers and basically was a movement against the people who fought the war. This was of course symbolized most visibly by the myth of solders being spat on when they returned.

I knew the reality of soldiers and vets opposing the wars is something that would both have a huge impact in this country, or should have. So when the IVAW (Iraq Veterans Against the War) announced they were going to have an investigation inspired by the Winter Solider event in January of 1971, it just was a no-brainer. I knew that I had to make that film. I also knew that I had to do it with Bestor.

BESTOR CRAM: I am a former Marine officer and participated in the G.I. movement back in 1970 when I was originally released from my contract with the Marine Corps. So there was an immediate interest when I heard from David that he was interested in making a movie about the new G.I. movement. It seemed like a natural synergy.

Nearly four years later, the U.S. has brought the war in Iraq to a close and continues to withdrawal from Afghanistan. What do you hope viewers take away from your film now?

BC: We would hope that there would be an ongoing discussion of the price paid for America’s military adventures, imperialism, occupations. Essentially, to be prepared for the way we behave in the future we need to be very diligent in how we examine our most recent enterprises. That dialogue has been suppressed particularly because any dialogue contrary to American policies was perceived as being against the soldiers as opposed to the war. We learned in Vietnam that that was wrong to blame the warrior. So we ended up not discussing the war when it came to Iraq.

DZ: I believe very firmly that these wars are imperialist and that the nature of these wars is characterized by the domination of the U.S. in that region of the world. The Bush Administration didn’t hide that that’s what their intent was. Talk of democracy and liberation continues to be pure hypocrisy and nothing defines that more deeply, more vividly, than the way the wars are conducted. It’s been said a society is characterized by its military, and I think that’s true. What’s revealed in our film more than any other I have seen is the political and social character of what the purpose of these wars is and I think the most interesting thing, this question of how society views the soldiers and how they view themselves is a good question.

One of the things very much re-written about Vietnam was why there was so much trauma coming from that war. At the time it was very clear that the trauma had to do with the fact that they had been forced to fight a war that targeted civilians and in fact killed many babies and had no purpose other than American control of that region. That is very similar to what we see in our film and the kind of trauma and the dilemma the soldiers and returning vets face. It’s not simply the horrors of war, but horrors of the particular kind of war. One of the things that is very positive about our film is that what people are grappling with is their personal responsibility in that situation. This is a very real thing. You have a responsibility as a human being to not carry out the kind of things that people are being forced to carry out in Iraq and Afghanistan. This should be grappled with now, not just after the fact.

What are some the responses you’ve received at recent screenings?

BC: The most recent was in L.A. at the Hammer Museum and I think that the universal response was, “How can we make sure others see this?”

DZ: There was also a Vietnamese woman who felt that she wanted to hear more from Iraqis. It’s reflective of something very real that I was sensitive about, which is that every American film I have seen about American soldiers is frankly obsessed with “our boys” and “our soldiers” and here we are pulverizing these countries and leveling cities. That is very real, but for people not from our country, like this Vietnamese doctor whose family fled from Vietnam, there’s a sense of wanting to hear form the Iraqis as well.

BC: We also heard that this film is such a downer. It’s not a warm and fuzzy film. Towards the end of the film someone says “to call us heroes is to deny paying attention and engaging us with our stories.” In some respects that’s what we have learned. It’s too hard to engage these stories because it’s too hard to pay attention to them without being a wreck.

How are your main subjects doing?

DZ: Geoff Mallard is still very active with IVAW and with an agency that works with homeless vets in D.C. He is probably, of the three, the most politically active. Selena is also doing well. She is in New York City and still works with veteran’s organizations. She is in college with help from the G.I. bill. Jason Washburn is the most troubled still. He has had a very difficult time finding peace and finding his place in the world. He travels around the country a lot, and kind of floats.

What’s one lesson you’ve learned in the making of this film?

DZ: As is true with any film about war, you can never expect that there is any uniformity about how to interpret policy amongst your subjects. The only uniform response from the solider is that everyone comes back having had a negative experience.

What’s one piece of filmmaking advice you’ve received along the way that’s been particularly memorable and useful?

BC: You have to believe in the film you are working on.

This Is Where We Take Our Stand is currently airing on public television nationwide. Check local listings.