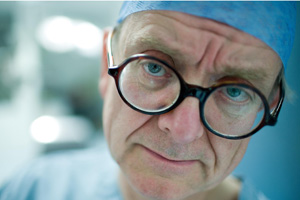 The English Surgeon! Congratulations to director/producer Geoffrey Smith and co-producer Rachel Wexler on picking up an Emmy for Outstanding Science and Technology Programming. The film aired last year on P.O.V. and received funding from ITVS International. The documentary follows a British neurosurgeon as he confronts the dilemmas of the doctor-patient relationship on his latest mission to Ukraine. Check out this clip below from the Emmy Award-winning film, The English Surgeon.

Check back in with BTB tomorrow for a conversation with filmmaker Geoffrey Smith.