The documentary American Teacher screened before a crowd of educators Tuesday night at the San Francisco International Film Festival. 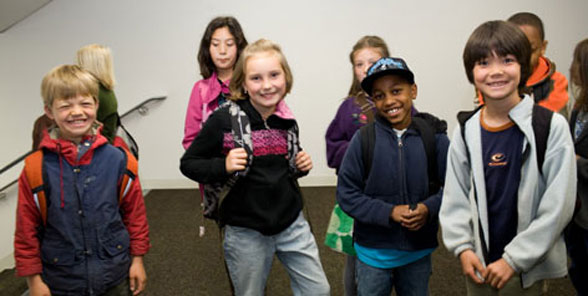 Tuesday night was National Teacher Appreciation Day, and at the San Francisco Film Festival it was a teacher love fest. And rightly so.  After a tough year of budget cuts and political controversy, educators deserve a break. The San Francisco Film Society’s Schools at the Festival program celebrated its 20th anniversary by giving local teachers the VIP treatment.

Director of Education Joanne Parsont and her team invited Bay Area teachers to a reception and the premiere screening of the much-anticipated film American Teacher, drawing long lines of festival-goers outside the Kabuki Theater. American Teacher – produced by Dave Eggers, Ninive Calegari, and Vanessa Roth – is a heartfelt portrait of everyday teachers, on the ground, making do with next to no resources and a surplus of passion. Avoiding mention of unions, testing or other hot button issues – the film instead is a character-driven story that makes a compelling argument that the best way to save our ailing education system is to pay good teachers more. Judging by the applause in the theater, it was an argument that hit home with the crowd.

The SFFS Schools at the Festival program started as an experiment with a handful of high school classes coming to screenings, and has since grown to serve more than 10,000 teachers and students each year. Many of them were in attendance for the celebration, testifying to the profound impact that viewing and creating films can have on young people’s lives. ITVS’s Community Classroom is a proud partner with Schools at the Festival. Visit our website to learn more about our free film modules and curricula for educators.

Join Community Classroom’s BEST. TEACHER. EVER. contest and highlight a teacher who made a difference in your life.