In March of this year, the ITVS board elected a new member to join its ranks, the acclaimed filmmaker, photojournalist, and VR entrepreneur Danfung Dennis.

“We are very pleased to welcome Danfung Dennis. His extraordinary body of work as a conflict photographer and videographer includes the ITVS-funded and Academy Award-nominated film Hell and Back Again and the Emmy-nominated film Obama’s War", said Sally Jo Fifer, President and CEO of ITVS. "He currently serves as the CEO of Condition One, an immersive video venture he founded. I’m certain that his sharp filmmaker’s eye, technological bent, and deep commitment to public media and independent voices will be assets to our board.” 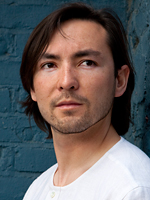 Danfung Dennis' VR films focus on invoking empathy and action on environmental and social issues and have premiered at the last three consecutive Sundance Film Festivals. His latest VR series, This Is Climate Change, will premiere at the Tribeca Film Festival.

Previously, he directed the documentary film, Hell and Back Again, which was nominated for a 2012 Academy Award, and took both the 2011 Sundance Film Festival World Cinema Jury Award as well as the 2011 Sundance Film Festival World Cinema Cinematography Award. Hell and Back Again had a nationwide theatrical release, an Independent Lens broadcast, and was digitally distributed by Apple, Amazon, and Netflix.

In addition to his work in documentary film, Mr. Dennis covered Iraq and Afghanistan as a photojournalist for the New York Times and Newsweek. His images have also been published in TIME, The Washington Post, The Guardian, and Mother Jones.