Lisa Merton, producer of Taking Root: The Vision of Wangari Maathai, attended the Nobel laureate and environmental activist's funeral in Kenya in October. Merton offered BTB this report on Maathai's legacy. Taking Root will be rebroadcast on Independent Lens on January 5. 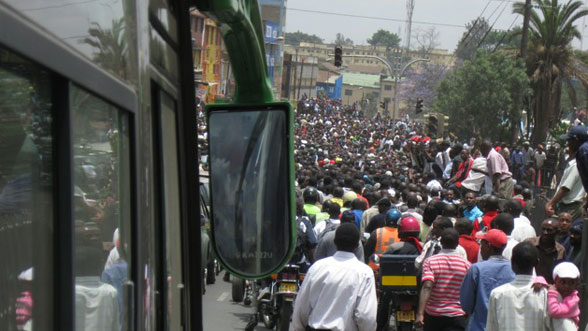 Wangari Muta Maathai, the first African woman and the first environmentalist to win the Nobel Peace Prize, died on September 25 in Nairobi. Alan Dater and I came to know Wangari well through the making of our film Taking Root: The Vision of Wangari Maathai. Her death leaves it up to each one of us to carry a part of the load that she so gracefully and fearlessly carried during her life.

I had the honor of attending Wangari’s state funeral in Nairobi on October 8. The funeral was at Freedom Corner in Uhuru Park, a hugely important historical site for Kenya because of Wangari. She had saved Uhuru Park when the Moi government wanted to build a 62-story skyscraper there; Freedom Corner was given its name when Wangari and the mothers of political prisoners were protesting there for their sons’ release. We were on hallowed ground.

There were thousands of people at the funeral. It was simple. First there was a multi-faith prayer service — some of it lively, some somber, all of it colorful and in several languages. After the hearse arrived from the funeral home, Wangari’s family planted a single Olea Africana tree in her honor. Then there were tributes by the Vice President, Prime Minister, and President. Wangari had decided that she did not want any trees felled to make a coffin for her body. Her casket was woven by Kenyan artisans with a frame of bamboo grown in her garden, water hyacinth (an invasive species that is destroying Lake Victoria) and Papyrus. It was also her wish to be cremated so as not to take up space. Wangari walked her talk to the end.

After the funeral there was a procession to the crematorium. The streets, bridges, windows, and rooftops were filled with thousands of mourners who escorted Wangari on her final journey. They danced around the hearse, they sang, they shouted, “Mama Wangari.”  A drive that would normally take 10 minutes took two hours. It was breathtaking. Her people were saying farewell. It was a fitting send-off for such a great and courageous woman.

Now, I sit here at my desk in Vermont looking out at the trees on the hillside dusted with snow and feel profoundly thankful and honored to have spent so much time with Wangari over the last nearly 10 years. She had a profound effect on my life. I see the interdependency of our lives with the natural world in a new light. Her life was totally in rhythm with her surroundings in Ihithe, that garden of eden of her childhood in the central highlands of Kenya. No combustion engines to mar the song of the birds, the whistle of the wind, the burble of the water in the Gura River as she and her family walked home from a day of cultivating on the land, watching the stars appearing in the night sky.

Every action she took in her life was imbued with the bodily memory of that peace, wholeness, and community. She carried that understanding of wholeness into her work, knowing that environmental justice, human rights, good governance, and peace are inextricably linked, as everything is in the natural world. Wangari always said, “You have to be committed, you have to be patient and you have to be persistent.” And that she was. She left a great legacy for Kenya and for the world.  May we do her the honor of helping to fulfill it and leave a world for our children that is full of beauty and wonder.

Watch the trailer for Taking Root: The Vision of Wangari Maathai below: