More Americans have been lost to AIDS than in all the U.S. wars since 1900. The pandemic has killed 22 million people worldwide. But few know about the existence of the National AIDS Memorial, a seven-acre grove hidden in San Francisco’s Golden Gate Park. The Grove chronicles this garden’s transformation from a neglected eyesore to landscaped sanctuary to national memorial. The film shows how a community in crisis found healing and remembrance, and how the seeds of a few visionary environmentalists blossomed into something larger than they could have imagined. 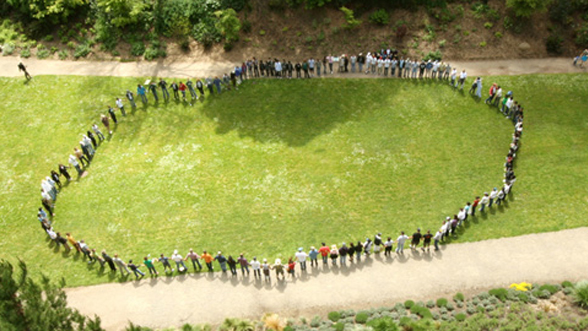 ITVS Broadcast and Distribution Manager Kate Sullivan Green sat down with The Grove filmmakers Tom Shepard and Andy Abrahams Wilson to discuss the film, which begins airing nationwide on December 1 (World AIDS Day) on the WORLD Channel.  Watch the film's trailer and read the complete filmmaker interview after the jump.

When did you first discover The National AIDS Memorial?

TOM SHEPARD: To echo that, I had also been living in San Francisco as a gay man for over 15 years and had heard of the Grove vaguely but didn’t visit it until I started collaborating with Andy.  It seemed hidden in plain sight.  I was struck by how unique and novel this place is as a national memorial, and also how thoughtful and committed the community that formed it is.  But given the recent debates over the 9-11 memorial, I was also interested in some of the politics of grief and of remembering with which, historically, many of our national memorials have been fraught.

ANDY: And who [a memorial] should be for.  I was also struck by what kind of a memorial it is.  It is a living memorial, not a monolithic structure.  It seemed very fitting to the AIDS epidemic — reflecting the natural cycles of life and death.  It’s a sanctuary and a perfect place to find solace and healing.

What’s an important lesson you learned making of The Grove?

ANDY: Something I have been made aware of is how the stigma of AIDS and homosexuality has converged with the AIDS epidemic, and how the gay community itself if partly responsible for the isolation.  The fact that the National AIDS Memorial is not better known is not just because of a lack of awareness, but it’s on [the gay community’s] part as well.  It’s the same way a lot of the people at the Grove want to keep it for themselves; I think we do that in a larger way.  We retreat into our own community and get our own support, sort of like we don’t need anything from anyone else.  That is maybe a reaction to a need to get nurturance, and an assumption that nobody cares about us anyway; but I wonder if it were not such a downtrodden or stigmatized community would there maybe be more of an engagement outside its own boundaries?  So for me it’s been a lesson in victimization and response to victimization.  In my personal life, if I feel like I am being victimized, I look to see in what ways am I perpetuating that.

TOM: Both making the film and the collaboration with Andy has done a lot for how I approach the intersection between the natural world and human cycles of life.  My father died recently so I have been thinking a lot about remembrance, and gleaning a lot of lessons about what it means to grieve from the environmentalists who founded the Grove.  Being in Colorado, walking through the parks my dad walked, and being close to the mountains, I’m learning to have a deeper connection with nature.

What’s one especially memorable piece of filmmaking advice you’ve received along the way that was helpful when making The Grove?

TOM: My editor and collaborator on my first couple films, Jim Klein, always used to tell me, “There are no absolutes in documentary filmmaking: it’s not either a verite film or talking-head film or narration or no narration.  If a device works to tell the story then it works.”  That advice has come back 100 times in terms of being able to look at really different kinds of projects and figure out how to honor the story.

ANDY: I’ll invoke an editor/collaborator too, and that’s Eva Brzeski.  She kept stressing the importance of not having to explain things and not using words or language that’s too technical or confusing.  It’s about just understanding the importance of simplicity.  It’s really not about exposition, or explaining a process.  What’s important is that were emotionally engaged.

TOM: And it’s not an accident that Eva and Jim are our two editorial consultants on this film.

What’s your favorite part of the production process?

TOM: I came in much closer to the beginning of post, which happens to be my favorite part of the process.  I really like pouring over the material, looking for the story and drawing it out.

ANDY: Bringing Tom in and having him be a part of the collaborative and creative process was my favorite part. I had been in isolation for a long time with this and I think that process of collaborating creatively is more and more important and rewarding.  Especially coming from a background that a lot of indie filmmakers do, where you’re doing everything yourself; sometimes you have to, but as I get older and more experienced, I don’t want to work in isolation anymore.

What’s something you hope viewers takeaway after watching The Grove?

TOM: Even though we’re 30 years out, there are people walking around with very fresh wounds.  Maybe it’s because of a stigma or homophobia, but people haven’t always had a place or a way to grieve or come together publicly.  So for those people who have been more directly affected by the epidemic, I hope the film resonates strongly with them.  For the larger audience, I think it’s a really interesting debate about what defines a national memorial, and in particular, a memorial for an epidemic.

The Grove airs on the WORLD channel nationwide on December 1, 2011, and will be airing on PBS stations around the country throughout the month of December. Check local listings. A companion to the film, iMemorial is a groundbreaking mobile app that uses mapping and augmented reality to remember loved ones and connect places and memories. Visit iMemorial.org for more information.