When Oakland-based queer couple, Nicole Opper and Kristan Cassady, chose to expand their family and traverse the foster to adopt terrain, they found few stories that shed light on this complicated process.

As seasoned documentarians, they turned the cameras on themselves to share their transracial adoption story, as well as friends’ adoption experiences, to create social visibility around a publically underrepresented cause. The F Word tells their story with humor and empathy.

ITVS: Tell us a little about the journey to this film and how you and Kristen meet along the way.

Opper: I grew up in San Diego and moved to New York for film school, where I stayed for the next 12 years producing independent documentaries for PBS and Discovery, as well as a series for Here TV. Kristan and I met while I was living in Mexico making my second feature doc, Visitor's Day, and she was living in New Jersey leading a music program at a boarding school for girls. The school flew me in from Mexico to give a talk about my first film (also an ITVS doc about adoption) Off and Running. She was kind of in charge of me for the weekend, and we hit it off pretty fast. A few weeks later she flew to Mexico for our second date and stayed for two weeks. We went back and forth like this for six months and when I wrapped production Visitor's Day I took the first flight to Miami, where she had since moved to, and basically showed up on her doorstep with a duffel bag, a bicycle and a videocamera. Two years later we got married.

Turning the camera on yourself can be exciting and nerve racking, why was it important to document your foster to adopt story?

Opper: When we started looking into adopting through the foster care system, we had a hard time finding stories that reflected this experience. We read every book, every article, every blog we could get our hands on, but there wasn't really anything in the way of visual stories or media at the time (unless you count The Fosters, which I secretly love). We figured if we were desperately searching for these images and these stories, other couples and single parents must be too, so it made sense to start documenting the process. Around the time we made this decision, ITVS launched the first round of Digital Open Call, so luck and timing played a role, too, as it so often does.

The voice, visuals and timing on the series is unique and comedic. Was that a decision or did that happen naturally?

Opper: Thank you! We knew we wanted this to move quickly, to be fun and light and have a lot of moments of levity, because we're dealing with such tough and often painful subject matter, so it becomes especially important to create a balance.

What led to the recognition that this story would work in a short docuseries form?

Opper: I love the short format and saw it working particularly well with this because I didn't envision a standard three act structure but a journey that would go off the tracks now and then and lead us down rabbit holes (...) . So it was about structure, and also audience. I imagined we'd reach a different kind of audience if we made these pieces short and sweet enough to watch on a coffee break or a morning commute. This is all still in the experimental phase so I can't say yet whether that's necessarily been the case, but I CAN say that I have a long list of feature docs sitting in my queue and as a new parent, I have no idea when I'll watch them. But I watch online content whenever I can catch a short break.

What kind of feedback have you received from the LGBTQ community in response to series?

Opper: It’s been so overwhelmingly supportive. I have to say, that’s been surprising because we’re still very much finding our audience too. We get a lot of messages through the website and Facebook, which are overwhelmingly positive. People expressing gratitude for getting to see themselves and their own families reflected, saying that they just went through the foster to adopt experience and they’re so glad to see it represented; or people who are about to step into it, acknowledging that it’s a lonely journey, and that the series countered that feeling of loneliness. Which is exactly how we felt, even coming from our own diverse, robust community out here, we didn’t know anyone at the time who had adopted through foster care, other than Johnny Symons [whose films Daddy & Papa, Ask Not, and Out Run are ITVS funded], and his experience happened several years ago. These responses to the show were meaningful to us, because it mirrored how we felt, and honed in on what we were trying to change.

How has filming The F Word strengthened your marriage? What about the relationship you have with yourself?

Opper: There is something really therapeutic in turning the cameras on yourself. I had heard about this, and know friends who have experienced this, making autobiographical work, but it cuts both ways. Making yourself vulnerable can bring about stress, but you’re also giving yourself space to reflect, that you wouldn’t otherwise give yourself. You recognize that this is for a project that has meaning, or maybe it’s for your career, and so you grant yourself that space. I think us allowing ourselves to take the time to talk through, process, and reflect on every step of this absolutely strengthened our marriage (...).

It’s so great to have the filming process to structure our lives. When we were getting frustrated with our lack of control over this whole situation, we could still always pick up the camera and make something, which was helpful to remember. Now we have to really seek out those moments to be thoughtful and reflective about parenting, because our life revolves around making sure our child is being clothed, fed, and taken care of (...).

Cassady: Being on camera together shared these more vulnerable sides to us and there’s no one else I’d rather go through that with. Nicole made it really easy to just pour my heart out and vice versa. We’ve produced two other projects together before this, but with each project your communication gets better, in terms of behind the scenes producing that has to happen. I didn’t come into this marriage with a film background, so I’m learning a lot from Nicole in the process, and being able to utilize those skills on The F Word, has made our communication stronger.

What key lessons did you learn while filming? What is on the horizon for the future.

Opper: We’re committed to turning the camera outward and telling a broader [foster to adopt] story that’s inclusive of more voices than just the adoptive parents’ (...). (...)[F]ilm is an emotional medium and people need to continue to connect to us on the most personal level and so we will continue to thread in our own private lives to a certain extent. We’re still determining how much of that includes Baby J, and we recognize that we need to continue sharing this story to raise visibility to create more adoptions through foster care, because there’s such a dire need. 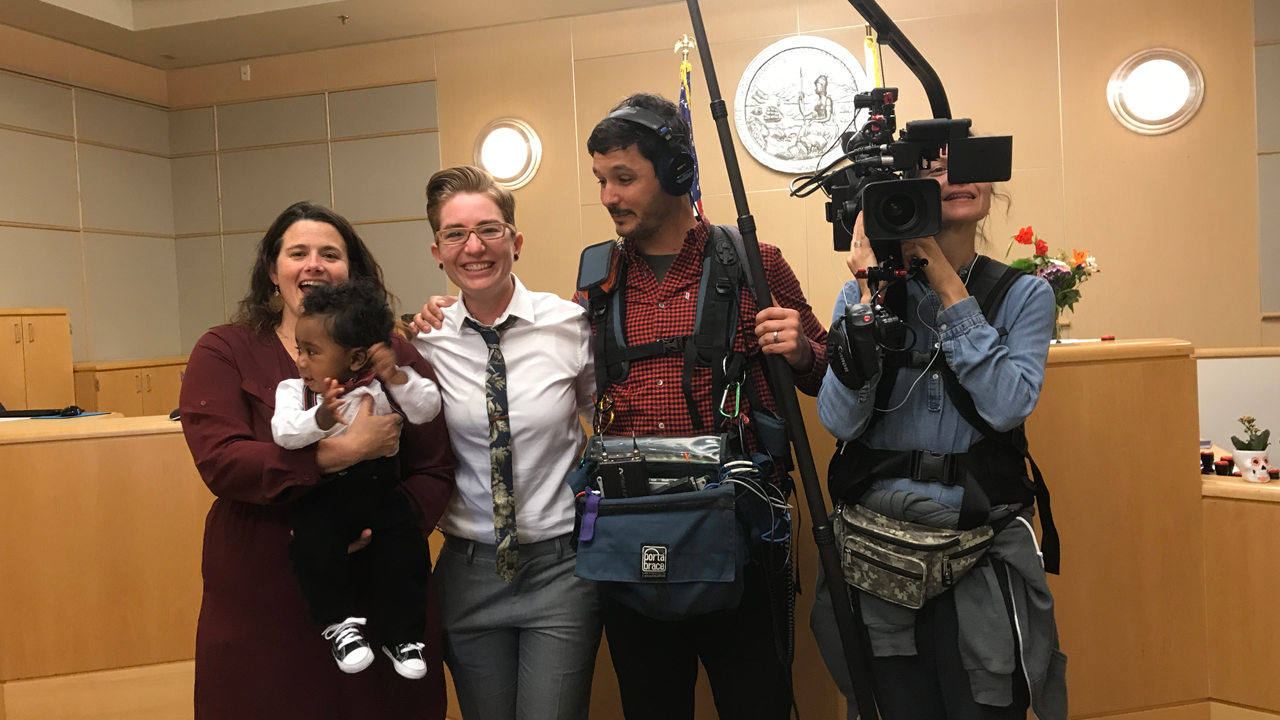 All episodes of The F Word are currently streaming on the Indie Lens Storycast YouTube Channel.