The Geneva Forum on Social Change (GFSC) was established in January 2009 by students of the International Organizations MBA Programme at the University of Geneva as an annual event which uses the power of documentary media to promote positive social change. Prominent filmmakers, academics and professionals lead stimulating discussions about the most pressing social issues. Chi Do, ITVS Associate Director of Communications, gives us her take on the forum: 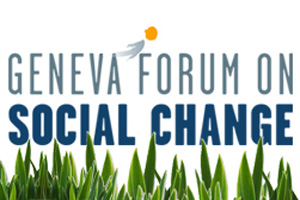 The term “movers and shakers” took on new meaning for me at the 2010 Geneva Forum on Social Change on May 28-29. The dynamic weekend featuring ten award-winning documentaries (including four from ITVS), four keynote speakers, six panels, seven workshops (plus expos on sustainability and new media!) brought together more than 500 people — all driven by a common desire to see how the merging of public and private, governmental and non-governmental, even the merging of our virtual and physical worlds can bring about innovations to address the most critical social issues of our time. 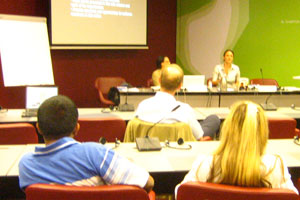 Geneva is a hotbed for international dealings whether it be diplomacy or finance, and the GFSC represented that to a tee by attracting participants whose work reaches so many corners of the globe: international organizations, NGOs, private corporations, diplomatic corps, foundations, the list goes on. In one room I would meet someone working to develop water and energy conservation programs for an entire country on behalf of USAID, and then turn around and meet another person who started a foundation to support youth in a small village in Africa with nothing more than what was in their savings account and the help of a few friends. The amount of brain stimulation and soul inspiration to be had was off the charts!

As I mentioned earlier, ITVS presented four films at the GFSC: Garbage Dreams, A Village Called Versailles, Pickles Inc., and Project Kashmir. There was a lot of buzz around A Village Called Versailles and people were eager to see the film and discuss what’s happening with the Vietnamese American community in the Gulf Coast right now in the aftermath of yet another disaster — the oil spill. The level of awareness and concern that I felt in those conversations showed me what a small world we truly live in, and that global citizenship isn’t just a pipe dream. 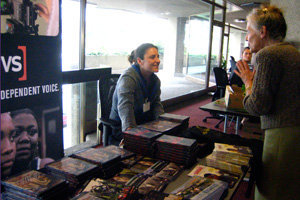 We were incredibly lucky that Mai Iskander, director of Garbage Dreams, was able to attend. Mai and I co-presented a workshop on community empowerment and education where we showcased The Garbage Dreams Game, an innovative online game that teaches us about the interconnectedness of recycling to local economies and the lives and livelihoods of its citizens. Mai also provided a great deal of insight into the Recycling School, a model program run by the Spirit of Youth Association which is featured in the film; through their efforts, young Zaballeen are not only given economic opportunities but educational opportunities where there would otherwise be none. Mai said of the experience, “the forum was an important opportunity to engage those interested in social entrepreneurship and sustainability in powerful dialogue.

I am so honored that Garbage Dreams was included in a conference that offered real, objective insight into the nature of social and cultural progress.” Keynote speakers at the GFSC included Marc Koska, founder of Safepoint and inventor of a non-reusable syringe, which cannot pass on an infection to further users; Arnaud Mourot, Executive Director of Ashoka Europe, a leading association of over 2,000 social entrepreneurs worldwide; Dr. Graham Clewer, Director of Ethical & Community Trade for The Body Shop; Arthur Wood, Founder of Total Impact Advisers, and a leader in creating and implementing new Social Financial models with cutting edge global social entrepreneurs. My time in Geneva was deeply inspiring and invigorating and I’m looking forward to carrying this energy towards cultivating new partnerships with the many contacts made.