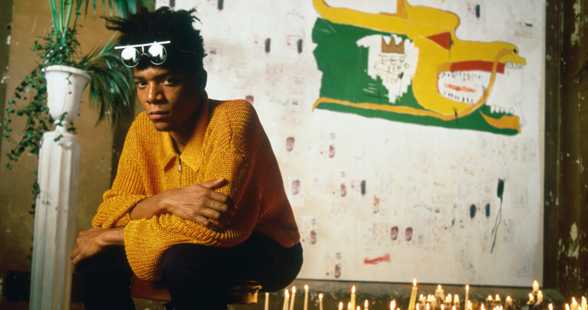 In preparation for the release of Jean Michel Basquiat: The Radiant Child, I was asked by ITVS to blog about it for Beyond the Box. While I’d like to think it’s because of my terribly trenchant observations about art, a subject I occasionally write about for The Huffington Post, it’s probably because I am Haitian. Basquiat was born of a Puerto Rican mother and a Haitian father; but I can tell you that to us, that darling of the 1980s New York art scene who went on to international fame and fortune, was of course Haitian! The natural outgrowth of a country where an artist is born every day. In fact, Haiti just might be the biggest source for black art in the world; so it makes total sense that a wunderkind like Basquiat should hail from there.

I had seen the Julian Schnabel feature, which chronicled the artist’s short life. I visited the electrifying retrospective of his work hosted by MOCA in 2005. I bought the catalog and often browse its pages, marveling at the man-child’s lavish creative output, searching for references that speak of Haiti. But this film gripped me in a way that transcended my Haitian filter.

Directed by Tamra Davis, Basquiat’s longtime friend, the viewer is regaled with footage of the artist responding to questions about his lifestyle, his art process, the art world’s perception of him; about race, and racism toward him; his new-found fame and its repercussions … you know, the things you would ask if you could hang with him and have a cup of tea, or vodka. Of course, I wanted more. I enjoyed listening to reflections of the people who loved him, lived with him and did business with him, but in the end, the enigmatic artist (who might be diagnosed with Aspberger Syndrome were he alive today) is the one you want. Like clues to a life-changing puzzle, or diamonds that shine a light on your soul, I hung onto his every word for a wider glimpse into that radiant mind of his. And then there is the art.

Happily, the film shows lots of it. Although we hear many hotshot art dealers proclaiming Basquiat a genius based on his early drawings and graffiti scrawls, I can’t say I would have been as insightful. To my eye, they looked like the drawings of a 7-year-old. There, I said it. But as the film progresses, we are treated to the artist’s creative evolution; and it is jaw-dropping, powerful, and heady stuff. Although vastly different in style, the art brought to mind the work of an artist who goes by Killy. Fifteen years older than Basquiat was when he died, his paintings and sculptures are forceful, emotional, and gripping without revealing his native roots. Perhaps art has nothing to do with place, and everything to do with the soul. But Killy is Haitian, and so was Jean-Michel Basquiat.

Carine Fabius is an author, museum curator, and owner of Los Angeles-based Galerie Lakaye, which specializes in Haitian art.