Producers and filmmakers convened in Boston last month for the annual CPB/PBS Producers Workshop. The program, started 10 years ago by veteran WGBH producer Judith Vecchione, has trained more than 190 producers from some 40 states, and ITVS has participated in every class since the beginning. ITVS' Senior Programming Manager, Richard Saiz, spent an entire day giving feedback to producers at the workshop. Matthew Meschery, Director of Digital Initiatives at ITVS, was also on hand. He co-facilitated a workshop on new-media and filed this report. 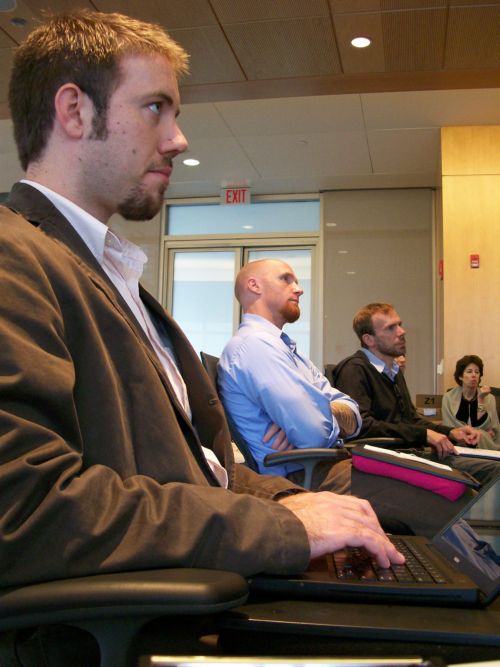 This was the first time I had attended the Producers Workshop in any capacity and it was also the first year they designated an entire class on the broad subject of new media. I was thankful for being invited and thankful that the Workshop’s Director, Judith Vecchione, WGBH, and CPB recognized new media as an integral part of a producer's training in working with public television. Oh yes, and I was thankful for the air conditioning in the WGBH building (I had forgotten just how humid New England can be in the summer). The session was co-facilitated by myself, Dave Peth, interactive producer at WGBH and Dan Sonnet, interactive producer for PBS. We decided to structure the first part of the session as an overview, covering a wide range of topics from trends in trans-media storytelling, to social media (a formal debate of the pros and cons of Facebook and Twitter), to digital distribution, to games (you’d be surprised how much documentary producers know about digital games).

We then spent the latter half of our three-hour session discussing some new media projects that the producers were working on. Projects ranged from a role-playing game to an episodic web series, to a user-generated content campaign. It was exciting to have producers share their ideas with us and their peers so openly and accept honest and constructive feedback considering this is a relatively new discipline for all of us.

I often tell film producers that not every project needs to have an elaborate multi-platform strategy. Just because applications for the iPad, or alternate reality games exist, does not mean they have to become a central component of your film. And this is why it’s critical for filmmakers to learn about these technologies and their differences. There may be one or several technologies and strategies that are best suited for a project and can provide inspiration for new ways to engage audiences and tell a specific story. Or, one may realize that, beyond some basic digital promotion and distribution presence, there is not a whole lot more that these new tools have to offer for them.

No matter what, though, as an independent media maker these days, it’s impossible to ignore the ways in which the Internet, and digital media overall, have affected how stories are told and distributed. I'm not suggesting filmmakers need to learn how to write code or design games, or spend 10 hours per week on Facebook to be effective in the digital space. After all, many filmmakers don’t have to edit or shoot their own films to be effective producers or directors. It’s a matter of understanding what these new tools do and how they can be most useful or creatively implemented that is important. Hopefully, this session at the Producers Workshop and similar seminars for independent producers such as the CPB-sponsored BAVC Producers Institute will improve the familiarity among independent filmmakers of the possibilities and limitations of working in the digital environment.