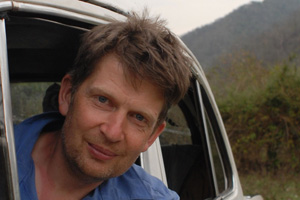 As the new International Call deadline quickly approaches (December 10, 2010!), BTB is highlighting past recipients. This week, we turn to filmmaker Simon Chambers and his film Cowboys in India, which will air on Global Voices next year. The film follows one tribe’s fight to rescue a sacred mountain from a multinational mining company. For those interested in applying for International call, take a look at the application and join the Facebook group to keep up with developments.

Beyond the Box: How did you get involved with this film?
Simon Chambers: I’ve been going to India for a long time and had a great curiosity about the country and I just wanted to spend more time there. India is one of those places I had an immediate affinity for. 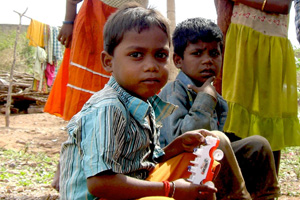 There were a bunch of tribal people in a remote part of India and they were fighting with bows and arrows to stop a British mining company from chopping the top off their sacred mountain. An anthropologist who knew the area well asked if I would accompany him. He said he had been getting various threats from the company. So I originally thought I would go there and make a film with him and use him as a main character. While on the trip, I met the two main characters of my film, Satya and Daya. They were my driver and my guide.

I immediately took to these two characters. There was something about them that seemed to be intrinsically Indian. I liked the relationship I had with them even though there were huge gaps in our understanding each other. This echoed the experience I had in India generally and the experience many Westerners have.

BTB: How was your ethical stance tested in making this picture?
SC: I wanted to challenge and explore the notion that the documentary filmmaker is some kind of high priest that travels around and comes back with the truth; the idea that the documentary filmmaker is always a good person with good intentions. Because when you’re filming you have such a hunger to get your films done. You’re desperate for dramatic moments. The classic example is when your character breaks down and starts crying. You have mixed feelings of whether you need to stop filming and comfort your subject while at the same time you think, “This is really good for my film.”

I address this question in my film when I inadvertently put my main character at risk. With Cowboys in India I also wanted to put a lot of the constructions we use when making a doc into the film. I always thought it was funny when you have a shot inside a car and you’re interviewing somebody and suddenly you cut to an exterior of the car. You’re in the car. You’re out of the car. Back in. And then you expect the audience to believe that it is true because it is documentary. The documentary is a mechanical construction of reality and it’s surprising how often people in the industry forget that and are taken in by the tricks used in editing. So I left the attempts to film those bits in the film. In any documentary the audience have to decide what is true.

BTB: You shot this film under grim conditions in India.How did ITVS International support you in making the film?
SC: I have to say that my first impression was that ITVS’s involvement was only going to be about funding. But they did much more than that. They played a very active and good role in the editorial aspects of the film and even though we, in London, were miles away from San Francisco, we managed to have a very active discourse about the final product. I was also very pleased with ITVS’s editorial involvement. We would send a DVD by courier and then I think ITVS had various viewing panels of filmmakers.

There were also people from ITVS themselves who looked at the film and gave us feedback and notes. Those notes were very useful. They gave us perspective on how the film would be viewed internationally and by a non-British audience. Everything from the most complicated issues around the differences between British narrative structures to American ones; to pronunciation differences, for instance, the right way to say the word aluminum! One serious problem we were having was trying to secure E&O insurance (errors and omission) because it was a film that was critical of a very rich multinational mining company. Just as we were starting to panic, ITVS came up with an E&O company that ended up insuring the film for us and saved our bacon. Really!

BTB: This year’s deadline for ITVS International has been moved to December 10, 2010. What advice do you have for international producers who are applying?
SC: My advice would be to make sure you apply with a project you feel passionate about and that you really want to make the film for the reason that it’s something you want to explore and express. I’ve met some people who will try to change their project to fit what they believe are within the ITVS guidelines. That might mean they’ll move away from the film they actually feel passionate about.

I believe ITVS can smell the kind of passion a filmmaker has for a project and I think that’s very important to their decision-making on projects. I don’t think that people should try to jump on bandwagons because filmmaking is a grueling process and if you have to spend two years making a film, you have to feel very passionate about it yourself.