Educating the world’s girls and women is one of the best social development investments to be made. But despite gains in access to education, keeping girls in school remains a struggle in the developing world.

What started with a case of job burnout and a much needed backpacking trip to Nepal for John Wood, soon evolved into a highly effective non-profit organization focused on literacy and gender equality in education in the developing world. After a chance visit to a school in the Himalayas, Wood was shocked to discover that the few precious books the school owned were locked up in order to protect them from the students. Dismayed by this lack of access, John reacted by collecting over 3,000 book donations and returned the following year, with eight book-bearing donkeys in tow. It was the reaction of the children that spurred John to then leave the corporate world and create Room to Read in 1999, with the mission to build schools and establish libraries in these underdeveloped areas. In the PBS documentary Half the Sky: Turning Oppression into Opportunity for Women Worldwide, audiences meet an array of individuals who battle against the various social issues that plague women and girls in developing countries. The poor living conditions and lack of opportunity found in countries such as Kenya, Cambodia, and India are met with the fierce resilience of aid organizations, such as Room to Read, who are unwilling to surrender to the brutal and unyielding cycle of poverty.

The education of women and girls remains a struggle in the developing world, despite the progress made in access to learning institutions. According to the United Nations, nearly 113 million children can’t attend primary school and another 264 million potential secondary school students are not in school. Without an education, the chance for social mobility decreases dramatically. These women and girls are also more vulnerable to problems regularly associated with a life in poverty, such as sex trafficking, forced prostitution, and lower wages. They are also more likely to pass on their socio-economic status to their children, who are less likely to value education as well. In Half the Sky, celebrity activist Gabrielle Union and New York Times columnist Nicholas Kristof travel to Vietnam and delve into this issue with Wood, investigating why the dropout rate for young women and girls is increasing despite access to educational institutions. 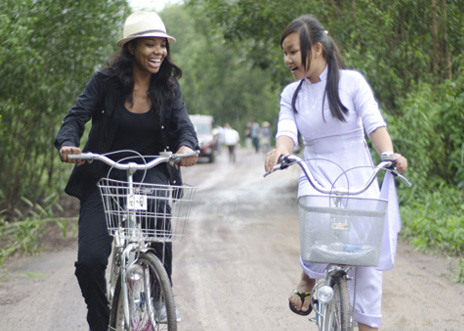 More than 50% of Vietnam’s population lives in poverty with the average person earning just $1 a day. In the effort to enforce the concept of a knowledge-based economy, the Vietnamese government provides universal education through the secondary level in order to support the 33% of the population that is under the age of 15. This heavily burdened system is faced with a short supply of facilities and teachers, and with students who don’t have access to the necessary school supplies. As seen in Half the Sky, children in rural areas have to brave a substantial daily commute through the dangerous Vietnamese countryside in order to reach the closest schools. Girls face even more challenges, often having to choose between an education and the pressure to help support their families.

Despite these issues, programs such as Room to Read, are helping students confront these challenges head-on. Since their establishment in Vietnam in 2001, Room to Read has placed special emphasis on the construction of schools and libraries, book publishing, and the printing of “big books” for shared reading amongst the students, helping rectify the issue of school supply shortage for many students. By focusing on the infrastructure of countries like Vietnam, Room to Read is helping reinforce the concept that the education of children, especially girls, is an invaluable social investment – one that can effectively fight poverty. To learn more about Room to Read and take inside look into their work in Vietnam, tune in to Half the Sky: Turning Oppression into Opportunity for Women Worldwide. This two-night broadcast special will premiere as part of Independent Lens on PBS on October 1 and 2, 2012.