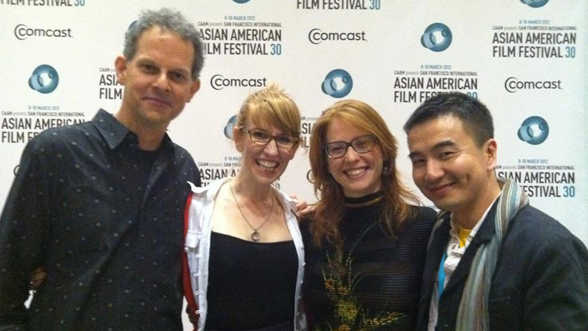 Filmmakers S. Leo Chiang (A Village Called Versailles) and Johnny Symons (Daddy & Papa, Ask Not), along with co-producers Eva Moss and Brittney Shepherd, were awarded a $5,000 research and development award at the Ready, Set, Pitch! panel held on Sunday, March 11 at the 30th San Francisco International Asian American Film Festival for their project Out Run (working title) – a feature length documentary project that follows openly-LGBT political candidates in parts of the world that are most hostile to their cause.

Chiang, who will co-direct and co-produce with Symons, delivered a dynamic pitch to the judges that included a clip featuring one of the film’s subjects, David Kuria, a gay activist running for the Kenyan Senate, who faces ongoing persecution during his campaign in the hope that one day those in the LGBT community will find acceptance, or at least tolerance, in his country.

What made Chiang’s pitch even more compelling was his description of the transmedia component of the project: an online, interactive hub for LGBT activists seeking office, which he described as a global political convention, where candidates could share stories and media about themselves and their campaigns. Four other filmmakers also pitched varied and unique projects: Ellie Lee, Kimberlee Bassford, Lisa Katayama, and Suha Araj (learn more about them at the CAAM festival blog). The judges for this panel included ITVS Vice President of Programming Claire Aguilar, independent film producer Gina Kwon (The Future, Me You and Everyone We Know), and blogger Phil Yu (angryasianman.com) and was moderated by Senior Strategist of Tomorrow Partners Wendy Levy.

Before the award announcement was made, Levy announced that the Center for Asian American Media (CAAM) would also award $1,000 to each of the remaining panelists. “It is wonderful and refreshing to see prizes given to all of the pitches,” commented Aguilar. “After the incredible hard work from the producers these prizes will leverage their crowd funding.” She also noted that ITVS is associated with Out Run, which is supported through the Diversity Development Fund. Also announced during the panel was a new funding opportunity from CAAM: the Innovation Fund, a new initiative recently approved by the Corporation for Public Broadcasting (CPB) to fund and license short, online content to be streamed on the CAAMedia.org website and PBS affiliate sites.

This year the CAAM Innovation Fund will offer funding to license short web series (3-5 pieces each) by independent producers that address arts, music, culture, and politics in unique and creative ways. For more information, visit the CAAM website. The festival is also screening director S. Leo Chiang’s new documentary Mr. Cao Goes to Washington as well as another ITVS-funded documentary, Give Up Tomorrow. SFIAAFF30 runs through March 18 in San Francisco, Berkeley, and San Jose.