Nationwide, Latino students face an increased risk of dropping out of school. 41 percent of Latinos ages 20 and older do not have a high school diploma, compared to 23 percent of blacks and 14 percent of whites. To address the growing high school dropout crisis among Latinos, the largest and youngest minority group in the U.S., Independent Television Service (ITVS) – the leading funder of U.S. independent public television productions – is launching American Graduate Latino as part of the national public media initiative, American Graduate: Let’s Make It Happen, made possible by the Corporation for Public Broadcasting (CPB).

Launching in November 2012 with a series of shorts, American Graduate Latino will provide the core American Graduate initiative with broadcasts and online programming in both Spanish and English to engage viewers, teachers, and community leaders in identifying and implementing solutions to the high school dropout crisis. 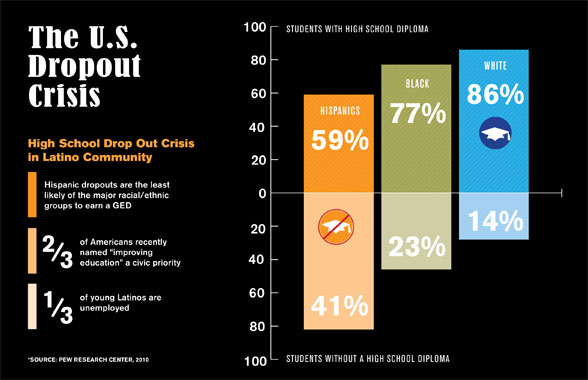 ITVS joins other public media producers and more than 65 public radio and television stations around the country that are working to bring together parents, teachers, business leaders, and community organizations to highlight the issue and create solutions to the dropout crisis. “Public broadcasting’s commitment to telling complex, in-depth stories is more essential to our democracy than ever,” said Sally Jo Fifer, ITVS president and CEO. “Through American Graduate Latino, CPB, ITVS, and independent producers have come together to help unravel a problem deeply affecting the Latino community – and the future of America."

At the heart of American Graduate Latino are two documentaries executive produced by award-winning director Bernardo Ruiz (American Experience: Roberto Clemente) slated to air in 2013 on the award-winning PBS series Independent Lens. The documentaries, produced in association with Latino Public Broadcasting, explore why Latino students are dropping out in such large numbers, tell the stories behind the statistics, and grant viewers unique, first-hand access into the lives of students, teachers, and education reformers. Created by a fully bilingual team, the documentaries will be produced and distributed both in English and Spanish.

“We are extremely pleased to be working with ITVS on this critical issue and hope that the documentaries will build awareness and encourage educators, parents, and community leaders to explore innovative solutions to engage young children in education at an early age, and empower them with the knowledge that will allow them to succeed,” said Sandie Viquez Pedlow, executive director of Latino Public Broadcasting.

American Graduate Latino will also feature five short-form documentary films executive produced by ITVS to target Latino audiences through multiplatform distribution including broadcast on PBS, V-Me, and commercial cable outlets and digital platforms like YouTube, SnagFilms, jaman, and pictv in both English and Spanish. The shorts, made by a select group of veteran and emerging filmmakers – including Betty Bastidas, Madeleine Bair, Xochitl Dorsey, Heather Ross, Jim Mendiola, Raymond Telles, and Angela Reginato) – will highlight the dropout crisis, focusing on risk factors and innovative solutions through the lens of Latino youth.