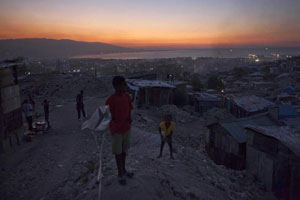 There are several programs focusing on Haiti this week, a year after the country was devastated by a 7.0 earthquake. In addition to Children of Haiti, which broadcast Tuesday night on Independent Lens, ITVS has profiled issues in Haiti in the past in these two films: Egalité for All: Toussaint Louverture and the Haitian Revolution tells the story of a movement that's been called the true birth moment of universal human rights.

Unfinished Country, reveals life on Haiti's streets and among its power brokers as the country endeavors to fashion a representative government out of a volatile state. Plus, airing Thursday night is the documentary Nou Bouke, which focuses on the January 12 disaster. Narrated by award-winning Haitian author Edwidge Danticat, the hour-long film will air on public television stations nationwide. Finally, NBPC's Haiti: One Day, One Destiny is a multimedia portal of stories about Haiti after the earthquake available on BlackPublicMedia.org. You can also find excellent coverage of Haiti, one year later, on the PBS NewsHour’s website. Have a look at this audio slideshow by Rick Loomis, a Pulitzer-Prize winning photographer for the Los Angeles Times. He arrived in Haiti one day after the quake to document the tragedy. Loomis returned to the country again in November to cover a looming hurricane and the continuing spread of cholera.