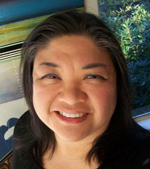 ITVS is happy to announce that Vice President of Programming Claire Aguilar has been named Executive Content Advisor. In this new consulting role, Claire will provide high-level, portfolio analysis and content feedback under the direction of Jim Sommers, Senior Vice President of Content and head of ITVS’ Content Strategy Team. With a focus on recommending content for ITVS International and selected public television series, Claire will also continue to co-curate programming for Independent Lens.

Previously, Claire served as head of ITVS’s programming department. She joined the organization in 2000 from public television station KCET/Los Angeles, where she programmed the station’s schedule and managed programming acquisitions. Earlier in her career, Claire worked as a film programmer at the UCLA Film and Television Archive, one of the leading exhibition venues for international documentary and classic Hollywood films.

She has served as a programming consultant and panelist for the Corporation for Public Broadcasting, the Rockefeller Foundation, the NEA, the Pew Fellowships in the Arts, and many other media and funding organizations. She has also led and participated in film juries for IDFA, Sheffield Doc/Fest, Silverdocs and Visions du Réel. Claire holds a Bachelor of Arts in Communications Studies and a Master of Arts in Film and Television Studies from UCLA. She serves on the board of Women Make Movies, STEPS International, and the EURODOC Steering Committee.