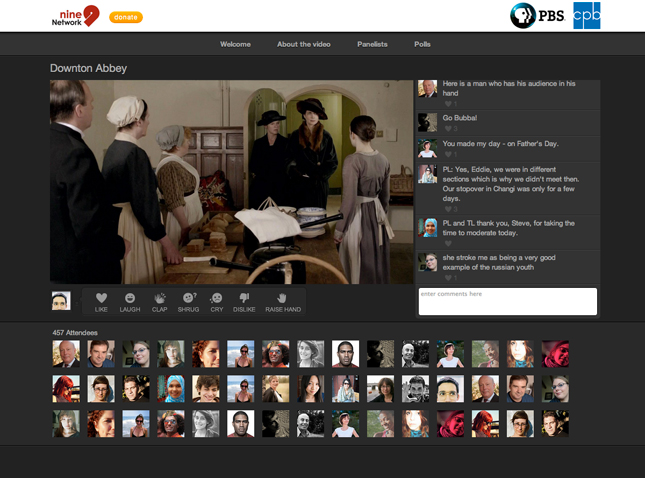 The latest version of OVEE features a customizable strip with a “Donate” button for stations. “Imagine a Downton Abbey screening with [creator] Julian Fellowes online,” said Dennis Palmieri of ITVS. “OVEE can do that.”

“No other media outlet has this,” said Dennis Palmieri, director of innovation and media strategy for San Francisco–based ITVS. The Online Video Engagement Experience platform, a freestanding web application that synchs up multiple streams on the PBS COVE website, allows online viewers to interact in real time around content by signing on through the platform or via Facebook. Pilot tests of OVEE by five pubTV stations and producers at Frontline and PBS NewsHour received positive responses. For the next pilot round, five pubradio stations will be among the beta group of 25 test sites. “There’s an enormous amount of interest” from the radio side, Palmieri said. In markets with separate PBS and NPR member stations, “OVEE offers real opportunities for joint engagement.” ITVS is considering both pubTV and radio stations as well as groups such as the National Federation of Community Broadcasters for the beta tests, Palmieri said. Each participant will receive grants of $5,000, and testing will commence in January 2013. OVEE’s official release is set for next spring. A $575,000 grant approved in June boosted CPB’s aid to a total of $1.5 million. The latest grant backs more work by OVEE’s developer to fix bugs in the system and install snazzy new features.

Public media engagement specialists are enthusiastic about this new tool for interacting with audiences. “The engagement possibilities with OVEE are enormous,” said Charles Meyer, executive director of the National Center for Media Engagement, which is providing training on use of the platform. OVEE can be used in educational settings and as a tool for convening dialogues that connect national programs to locally relevant topics. “Beyond that, imagine using the tool to convene live virtual town hall events that remove physical barriers to participation — or convening other virtual meetings and discussions about significant local concerns.” “We’re writing OVEE into most of our upcoming plans for community engagement,” said Beth Curley, president of Nashville Public Television, one of five original alpha testers for OVEE. “This can be really useful for the whole system.”

The concept is simple: Gather viewers online in one spot to converse electronically as they watch PBS and local station content. “OVEE is like a traffic management tool,” Palmieri said. “It lines everyone up so the individual streams on PBS.org are all synched to within three seconds of each other.” The concept for OVEE sprang from ITVS’s flagship outreach program, Community Cinema, a series of screening events convened monthly in some 120 cities to bring people together to watch and discuss films. Community Cinema continues to expand to more cities, but ITVS has a limited capacity to support more events, Palmieri said. Each month “we send out hard copies of DVDs, line up brick-and-mortar facilities for screenings, even supply branded popcorn and postcards.”

When exploring how to offer the experience to even more people, ITVS saw the potential for doing so online. With initial funding for the first kernel of an idea, ITVS convened three meetings, in late 2010 and early 2011, in Madison, Wis., St. Louis and San Francisco, to meet with station reps, members of the Minority Consortia, and independent and series producers. Their input “was integral to informing the development of OVEE,” Palmieri said. Carbon Five, a San Francisco–based firm that had revamped the ITVS website, is building the platform. Nashville PTV, a strong Community Cinema supporter, was intrigued from the start. “OVEE presents amazing engagement possibilities,” said Joe Pagetta, director of media relations and online strategies. “It can be really fun, too. There are lots of fun things on public TV.” Nashville conducted an OVEE screening of its hit local show Tennessee Crossroads in June, in anticipation of the station’s 50th anniversary. “We dug up the very first episode from 25 years ago, digitized it and invited fans to come watch with us,” Pagetta said. “It was a blast. People loved it — seeing what the host looked like back then, all the hairstyles.” Around 200 fans joined in with the executive producer online.

On Aug. 29, the station hosted an OVEE screening of two of Nashville’s original kids programs from the 1970s and ’80s, Mrs. Cabobble’s Caboose and Jellybean Junction. Several hundred people nationwide also participated in an event with a much more serious theme: NPT’s presentation of the “War Redefined” documentary in July, which was produced as part of the Women and Girls Lead initiative’s Women, War & Peace series from ITVS, CPB and PBS. Oscar-winning actress Geena Davis hosted from Nashville. Curley plans to use OVEE to present another Women and Girls Lead film, Kind-Hearted Woman, about domestic violence. “That would be a way for women to access the material in the privacy of their home, or a library,” she said. “They can remain reasonably anonymous.” For an upcoming multiyear outreach project aimed at senior citizens, OVEE could provide interactive access to homebound participants and their caregivers. She also envisions “ancillary uses” even beyond community screenings. For NPT’s Tennessee Explorers series on scientists in the state, the station works with a number of people in various locations — academics, researchers, producers. “As part of the production process,” Curley said, “we could put a segment on OVEE and have a live discussion about what works.” Meyer noted that for statewide licensees or rural broadcasters, “this tool especially holds promise for overcoming distance and logistical barriers to bringing people and organizations together to identify and discuss relevant local issues.”

Another pilot tester is Frontline. The WGBH icon news show sponsored an OVEE screening of The Interrupters in February that drew several hundred participants. “This combination of a screening and a concurrent chat with the filmmakers was powerful,” said Nathan Tobey, Frontline’s digital community manager. “It felt like bringing our audience into a room for a casual screening and discussion with the filmmakers and subjects. Of course, creating such an event in person would be logistically difficult and costly. OVEE made it feasible and fun.” More recently, Frontline and City Year, a mentoring nonprofit targeting at-risk schools, partnered on an Aug. 23 event around Middle School Moment, a short film that is part of the show’s Dropout Nation community engagement campaign, supported by CPB’s American Graduate initiative.

City Year has student mentors in 24 cities across the country; Sandy St. Louis, who oversees Frontline’s Dropout Nation, knew the documentary would be perfect for them. “I was looking for a way to deliver the film to each of the affiliates,” St. Louis said. “I asked City Year, ‘Would you be willing to participate in an interactive experiment?” They enthusiastically agreed. “The great thing about City Year is, the volunteers are 20-somethings, so they are online all the time,” St. Louis said. “This is a chance to expose them to really good content while engaging them in their natural platform.” About 70 people interacted online, with many more viewing and talking amongst themselves in groups across the country: 20 in Detroit, 60 in Chicago, 20 in Washington, D.C. After the film, the conversation continued for another 45 minutes. “We were really impressed with the depth of knowledge and thoughtfulness of comments, and not just about film,” St. Louis said. “They were interacting in a deep way with each other.” “Technology never replaces human interaction,” Meyer said, “but like TV and radio, the OVEE platform can facilitate human interaction in profound and productive ways.”

Meanwhile, next-stage development of OVEE continues, based on feedback from pilot users. There have been a few glitches along the way — “Anybody working on a tech development project who tells you there are no bumps in road is lying,” Palmieri said — but nothing insurmountable. Firewalls and compatibility with older versions of web browsers have been the main bugaboos. Bell and whistles to be added to OVEE involve tweaking the interface to allow users to switch easily between full-screen viewing and interactive modes. In addition, screening organizers will be able to use clips from up to four programs in one screening. Stations will be able to place a “Donate” button in a customizable strip atop the screen. The possibilities for enhancements are endless — and tantalizing. As Palmieri said, “Imagine a Downton Abbey screening with [creator] Julian Fellowes online. OVEE can do that.”