Named one of “10 Digital Directors to Watch,” by Daily Variety, Jon Reiss has directed three feature films most recently Bomb It about graffiti, street art, and the battle over visual public space throughout the world. His experience releasing Bomb It with a hybrid strategy was the inspiration for writing Think Outside the Box Office: The Ultimate Guide to Film Distribution in the Digital Era, the first step-by-step guide for filmmakers to distribute and market their films. Reiss will be conducting a workshop from July 31st to August 1st all about DIY distribution, at the San Francisco Film Society. BTB spoke with Reiss via Skype last week while he was in Melbourne, Australia.

How did you get started with DIY filmmaking? 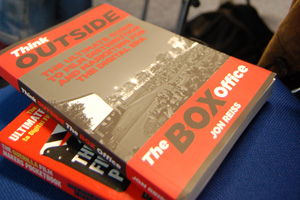 I guess I got started with DIY filmmaking back in the San Francisco punk rock scene. That’s how I got into film in first place. At the time, I was an Economics major at Berkeley and was a planning on getting a PhD in Economics at Stanford but somehow ended up living in a rat-infested loft in San Francisco shooting punk rock bands. [I went] to Paris to show the videos and I thought, “Why not go to the rest of Europe?” So, I started booking tours throughout Europe and that was really my first experience with DIY distribution. It was also my first experience with creating events and using non-traditional venues — that I’ve now come to champion — which is, I believe, the future for independent films.

At the California Institute for the Arts you teach a class called “Reel World Survival Skills: Everything I Wish I Had Been Taught in Film School.” What does the syllabus look like? Half the syllabus looks like my workshop. I added a section on pitching, a section on film finance, grants, business plans, a section on rights and acquisitions. I do a whole survey of the industry. The Cal arts students like it  because, like most filmmakers and most film students, they have heard that something is amiss in the film distribution world; they are not sure what , and they are not sure what to do. So it’s great to hear that something else can be done. I firmly believe that this new process of distribution and marketing needs to be integrated into the filmmaker process much earlier. Filmmakers should realize making a film and connecting a film to the audience are in a sense part of one whole. And if you think about it, most filmmakers go into film to connect with an audience. The current system, however, has separated filmmakers from the process of audience connection.  And that’s a mistake, because there are many benefits to filmmakers who embrace a direct connection with their audience.

Your film, Bomb It, was a feature documentary covering the explosion of graffiti culture throughout the world – and premiered at Tribeca in 2007. Tell us about the experience and how that changed your impression of the distribution business?  At that premiere, we thought we had a decent chance of selling our film to a distributor. I had managed to get my previous two films distributed and I thought this one was better and therefore would get better distribution. We hired a publicist, packed five 500-seat houses, and turned away some 200 people at each screening. Lines around the block. And I thought for sure  several distributors would see that and say, “Let’s get this movie!” We got some offers for overall deals, but without an advance. We were offered maybe a $10,000 advance on one but were smart enough to know that any overall deal we took would not amount to making any money. That experience made me realize, something in the market was shifting. And I don’t mean to be egotistical saying that, “If my film didn’t sell then we must be in a down market,” but, based on my previous experiences, I realized things were different. That same year at Sundance, only four out of 200 films sold. Same went for Toronto. So that’s when everyone kind of recognized that the sky was falling. At that point I thought, “If no one is going to release my film, I’m going to do it.” 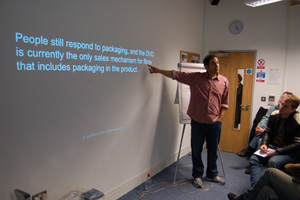 What do you tell filmmakers who struggle to raise money, or worse, raise money and then struggle to find a distributor? I tell them to take the money they have to make the film, and split it in half. Make the movie with one half and save the other for distribution and marketing. I almost guarantee them they will thank me later. I know how hard it is to make a film for no money. That’s why I created this position of the producer of marketing and distribution or PMD. At one of my recent workshops, out of 40 people, eight wanted to be a producer of marketing and distribution. So that’s the solution for filmmakers who are overwhelmed with the making of the film. Bring someone else on board who wants to do this work.

What should filmmakers expect to takeaway from your crash course coming up in San Francisco? They will come away with a new step-by-step method of how to approach the distribution and marketing of their film. That process needs to start as early as possible. What writing the book helped me do was systematize my approach and provide an accessible way for people to see the new distribution and marketing landscape. Even though the amount of information is overwhelming, the process is not overwhelming.

Give us your best guess as to what the film business will look like in 10 years. I think you’ll see a lot more people creating content that isn’t just a feature film. You’ll see much more trans-media and cross-media elements to features. You’ll see filmmakers creating long-term relationships with fan bases. I think you’ll see a much more robust digital distribution industry. And you’ll see more companies designed to help filmmakers connect with audiences. You’ll see consumers subscribing to curatorial websites to access content. Filmmakers will be much savvier too, realizing that its far more beneficial for them to cultivate a fan base over the course of their career and not just for an individual project. But the one thing you won’t see is kids coming out of film school under the impression that all they have to do is make a movie and let a distributor handle the rest. Although that might still be possible, they will certainly recognize that if a distributor for their film doesn’t exist — there are a plethora of other options.