When I Rise tells the story of a gifted black music student at the University of Texas who is thrust into a civil-rights storm that changes her life forever. Filmmaker Mat Hames shares a critical step in making the documentary, which is currently streaming on PBS Video.

Watch When I Rise - Center Point: A Musical Legacy on PBS. See more from Independent Lens.

Very early on in the process of making When I Rise, I spent several weeks pouring through old University documents. At the Dolph Briscoe Center for American History in Austin, I came across a box of files related to Barbara Smith Conrad from the University President's office. Inside was an old, thick file folder from 1956, simply labeled "Opera Incident." Many of the letters inside were handwritten, a few were typed, and all of them contained an outpouring of emotion over Barbara's removal from a UT opera by President Wilson at the urging of segregationists in the Texas Legislature. Some letters were predictably supportive of Barbara's ousting, with racist diatribes included; some included pamphlets distributed by White Citizen's Councils filled with absurd "racial science" attempting to justify keeping segregation in place. "Integration is just another front for Communism," one man scrawled.

Along with those letters supporting her removal, there were also equal letters of support for Barbara, and I began realizing that most of these letters were praising Barbara's handling of the situation and written to Barbara herself.  President Wilson was copied also. One letter to Barbara began, "This is just a note to extend to you my deep personal thanks for the grand manner in which you have conducted yourself during the last several days which, I am sure, have been more than trying." 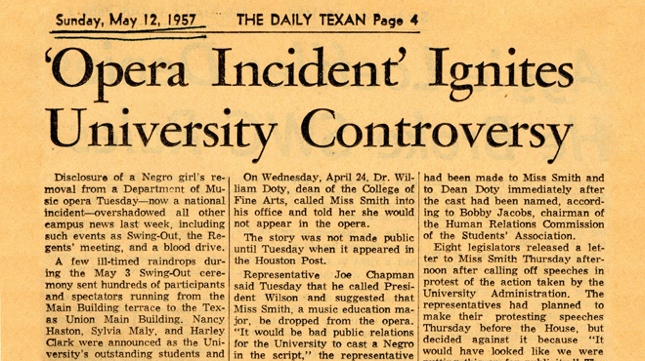 Headline from the University of Texas Daily Texan newspaper, May 12, 1957

Another read, "I just want to commend an East Texas girl who, I feel certain, has made every friend of the University proud." There were letters of support to Barbara from all over the world —  US soldiers stationed abroad in Germany, citizens of tiny Texas towns, churches in California, even other members of the Texas Legislature. As I read the letters I felt so much emotion, and I wondered if Barbara had ever seen these. I suspected she hadn't. A lot has been written about the support Barbara received from high profile figures like Harry Belafonte, who invited her to come to New York and helped launch her career, or Eleanor Roosevelt, who reached out to Barbara during the opera controversy.

But there was also an outpouring of support for Barbara from average people all over the world who were outraged that a young girl was denied the right to sing. As I filmed for two years, I wanted to somehow capture the raw emotion I felt while reading the letters, but never did. As I write this, I look back at my old story documents where I took notes and attempted to build the film's structure, and I'm reminded of a truly horrible idea I'd had to film re-enactments of the letters being read aloud by actors. (Thankfully I didn’t.) After my co-editor, Sandra Guardado and I put together a very long rough cut (about 3 hours) to craft the film's structure, I still felt it was important to convey the emotional outpouring from everyday people who took the time to write these letters. 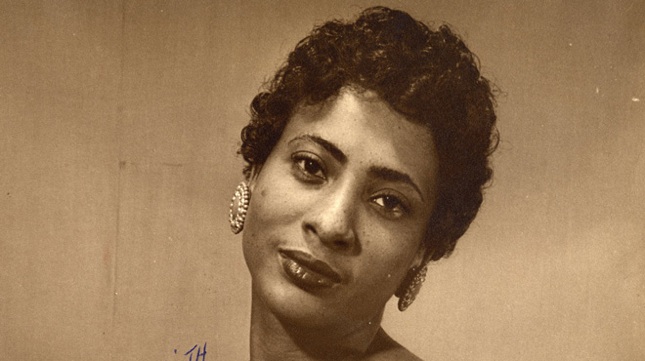 Earning Barbara's trust was a process, one that began for me when I met her in East Texas on an incredibly hot day in June. She and I clicked right away, but over the course of two years she grew more and more comfortable sharing the details of what she experienced, and we became good friends. She and I would talk quite a bit (and still do), and one of the things she kept telling me was how much love and support she received during the opera controversy from regular people she barely even knew.

At one point, I told Barbara that I'd read a lot of letters that were sent to President Wilson's office, and I asked her if she had ever read them. She hadn't. I asked if she remembered receiving any letters in her dorm. She didn't. But, she said she wouldn’t have wanted to open the mail during that period. Finally, on one of the final shoots at the University of Texas, I asked Barbara if she would like to go to the archives and read the letters. She agreed in an instant. As we walked across campus and then into the building, I could tell she was starting to get apprehensive. 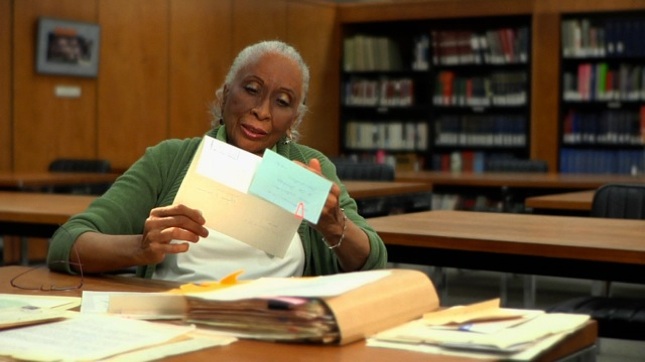 Barbara Smith Conrad reading the letters that had been sent to President Wilson's office.

I set the file folder on the table and didn't pick specific letters for her to read, but I did put a supportive letter close to the top of the stack because I wanted her to see it early and realize that all of the letters weren't hateful. She read three or four letters out loud, and I felt she was becoming thoughtful and introspective. She would pause a long time in between reading the letters, considering the words. While reading racist letters, she laughed in disbelief a few times, and I think she just really felt sorry for the people who wrote them. Then, as she realized how many letters of support she received, her emotions started to overwhelm her, and she wept as she read them.

We almost had to stop when she read, “Many problems arise as people try to learn to live together as I think their Creator intended, but in a wonderful way you have made yourself a part of the answer rather than a part of the problem.” Then she read these words: "Let me suggest that the inspiring performance which you have given in the real life role of Barbara Smith leaves the make-believe role of Dido looking pretty unimportant."