Siqueiros: Walls of Passion directed by Lorena Manríquez, and co-directed by Miguel Picker tells the story of Mexican muralist and visual artist David Alfaro Siqueiros. He is regarded as one of the three great Mexican muralists of the 20th century, along with Diego Rivera and José Clemente Orozco. Throughout his life, Siqueiros was a revolutionary figure and activist who fought in the Mexican Revolution and the Spanish Civil War, was exiled twice from Mexico for his Marxist politics and for his assassination attempt on Leon Trotsky. 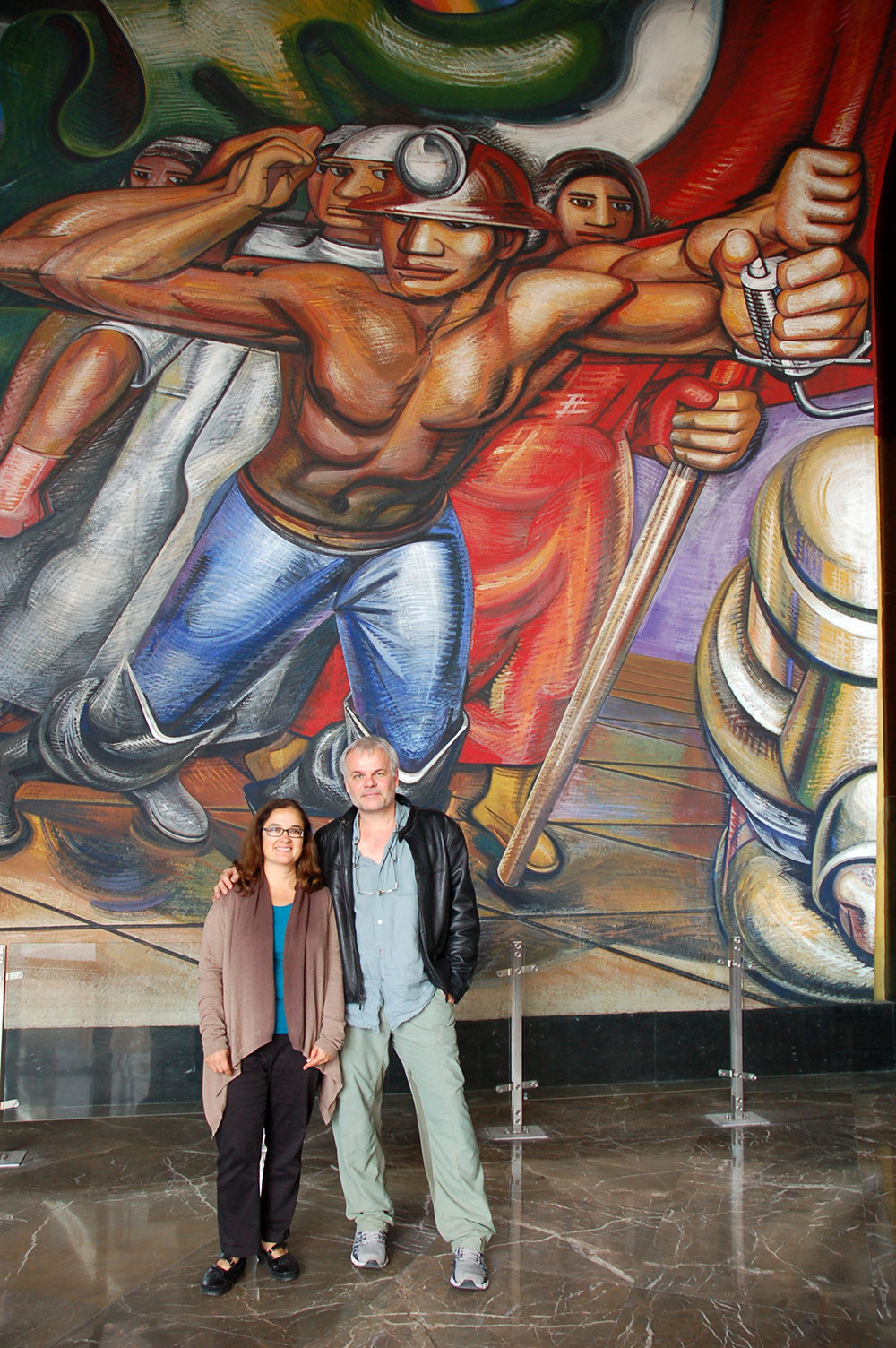 Siqueiros’ artistic practice influenced modern art throughout Latin America and the United States and was monumental in the rise of the Chicano movement with his mural "América Tropical" in Los Angeles that represented imperialism and oppression. He even taught Jackson Pollock the drip technique.

The documentary explores Siqueiros’ artistry, family, and political history through a narration based on his writing and voiced by comedian and actor Cheech Marin. Other voiceovers include Siqueiros’ wives Graciela Amador, voiced by Mexican actress Yareli Arizmendi, and Blanca Luz Brum, voiced by Chilean actress Carolina Vargas.

Manríquez is a Chilean award-winning filmmaker based in Los Angeles. Her first feature documentary Ulises’ Odyssey investigates the rift in her family caused by the aftermath of Augusto Pinochet's brutal dictatorship. Manríquez has also directed and produced the shorts Hopewell and Here I’ll Stay for Field of Vision.

Siqueiros: Walls of Passion was awarded funding from the ITVS Open Call and Diversity Development Fund. The film, co-produced with Latino Public Broadcasting, premieres on the WORLD Channel. Director Lorena Manríquez spoke with me about the filmmaking process behind Siqueiros.

When and how did you first learn about David Alfaro Siqueiros?

I first learned about David Alfaro Siqueiros in 2009. His mural, "America Tropical" on Olvera Street, was being conserved by the city of Los Angeles and the Getty Institute. I was curious about who this artist was and Googled him. I was immediately mesmerized by the images I saw. They were powerful images that portrayed human suffering in ways I had never seen before.

I also learned he had painted a mural in my native Chile in 1942 that I had never heard of, called "Muerte al Invasor (Death to the Invader)." The mural portrays the Mapuche indigenous peoples of Chile, in their struggle for freedom and independence from the Spanish conquistadors. I became really interested in learning more about the artist.

How did you get started on telling this story in the film Siqueiros: Walls of Passion?

After learning about the whitewashing and rebirth of "America Tropical," I realized that this was an important untold story about the interplay of art, and politics that led to the restoration of this controversial mural in Los Angeles. The mural had been whitewashed soon after its unveiling in 1932 but had survived for years hidden behind the paint layers that had censored it. The mural began to re-emerge during the Chicano movement of the late 1960s and 70s as the white paint began to peel.

Soon the mural became a cultural symbol of historical importance not just to Latinos in the U.S. but to all people of color who were inspired to tell their stories on public walls all over the city of Los Angeles and in other cities around the country.

I immediately wrote a research and development grant for California Humanities, then known as California Council for the Humanities. A couple of months later, I was notified that I had been awarded a California Documentary Project grant for the 2010 cycle. This got me on the journey of producing Siqueiros: Walls of Passion for the next 10 years. With the Cal Humanities grant I was able to do extensive research and to begin shooting and producing a fundraising trailer for the project. During this process, I learned of not only the influence of Siqueiros in Los Angeles, but also in the rest of the country and the world. Very quickly, the story of Siqueiros as a universal artist emerged.

Later on the ITVS Diversity Development Fund, Latino Public Broadcasting, ITVS Open Call, and Firelight Media funds trickled in. It took 10 years to get all funding in place to complete the film. 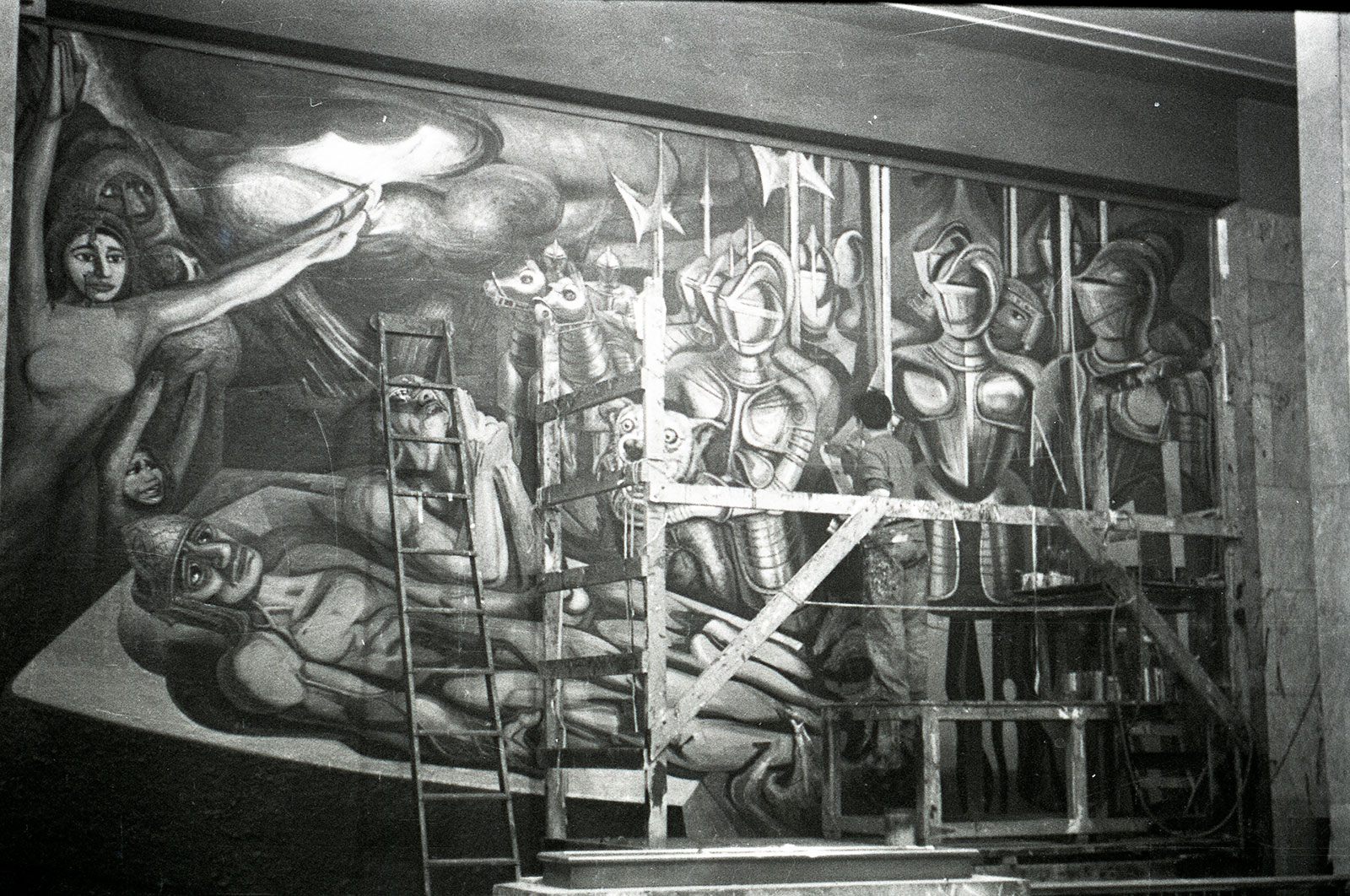 Through Chicano artists and activists that I met in Los Angeles, I met Anna Siqueiros. Anna is Siqueiros’ great-niece and a visual artist herself. She introduced me to other members of the Siqueiros family and to his descendants in Mexico. In one of my visits to Mexico in 2012, I met with one of Siqueiros’ great-grandsons and we began discussions about the film.

Julie Arenal is Siqueiros’ niece on the Arenal side (Siqueiros’ third wife was Angelica Arenal). Julie lives in Los Angeles and I met her through a friend of an acquaintance. I had the opportunity to show her one of the first trailers of the film. Since then, she became a great supporter of the film and, later, was interviewed for it.

How did you get actor Cheech Marin to do voiceover?

I wrote to Cheech’s agent with a synopsis of the film, and a link of our fine cut. I thought he might be interested in doing the narration because Cheech has one of the finest private collections of Chicano art in the US. Luckily, he said yes! I am based in Los Angeles, where he lives, so we met at a sound studio on the west side to record his narration. 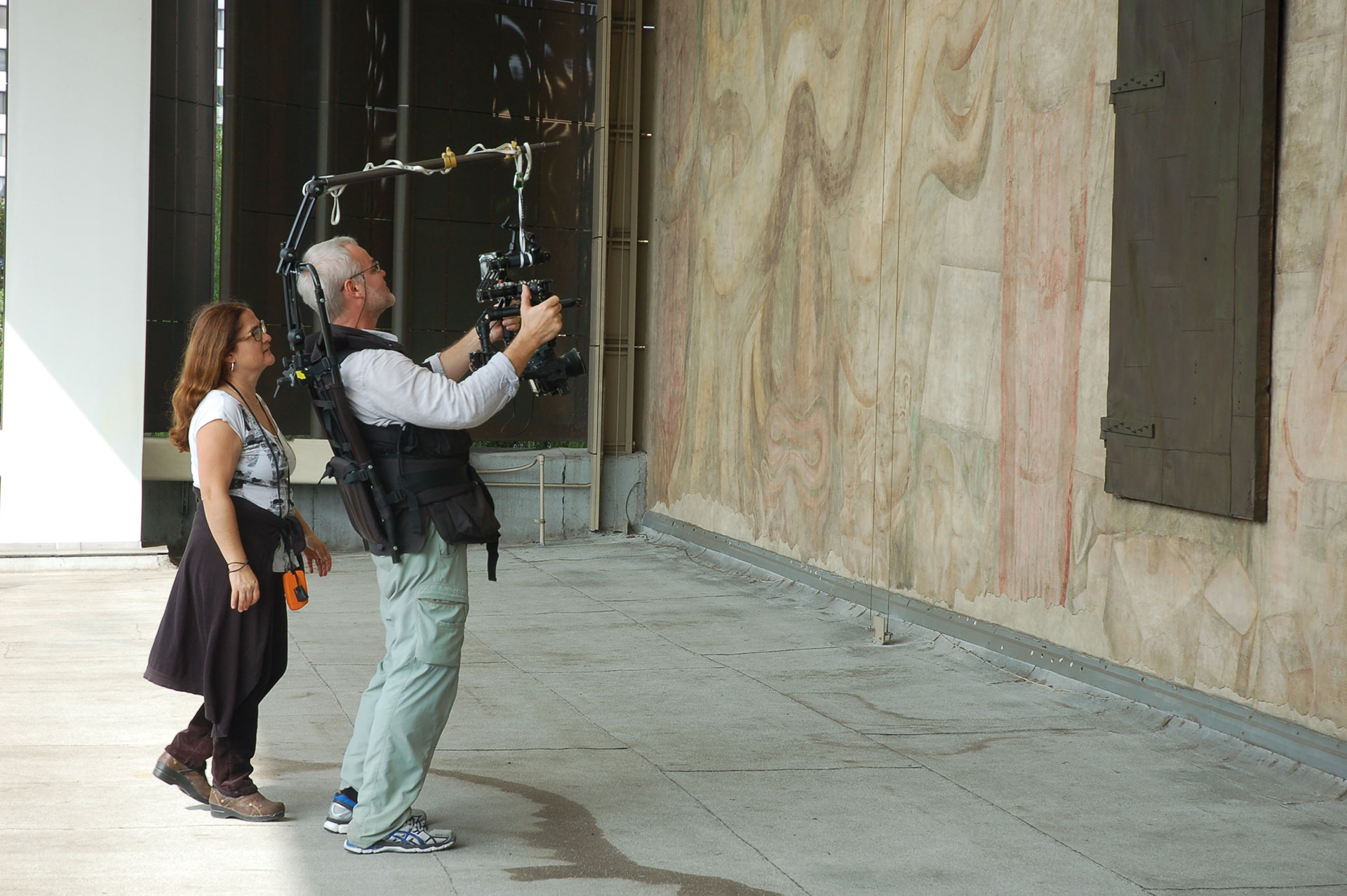 Lorena and Miguel with Steadicam in front of a Siqueiros mural

How did you get access to Siqueiros’ writing as the source for the narration?

Siqueiros wrote extensively about his life in his memoir and other books he wrote. His memoir is now out of print in Mexico, but I was able to get a copy at the Los Angeles Public Library.

On one of my trips to Mexico, I purchased all the books he had written that I could find in downtown Mexico City bookstores. On that same trip, I visited the Siqueiros archive where I spent a couple of days researching and made arrangements to get all his voice recordings and video recordings. All these, of course, were in the Spanish language.

And how much writing did you do for the narration?

Most of the writing of the voiceover is based on translations from Spanish to English from selections of his autobiography, his recorded interviews, and interviews by others that were finessed for continuity and cohesiveness. In a few instances, some historical context was added, such as the introduction of the sequence on the Spanish Civil War, for example.

How did you get access to such rich archival materials, such as all the photos, footage, and images of paintings?

The archival portion of the film was probably the hardest, most expensive, and time-consuming part of the production. All of Siqueiros’ artwork and writings used in the film were licensed through the Artists Rights Society which protects the intellectual property of artists such as Siqueiros. 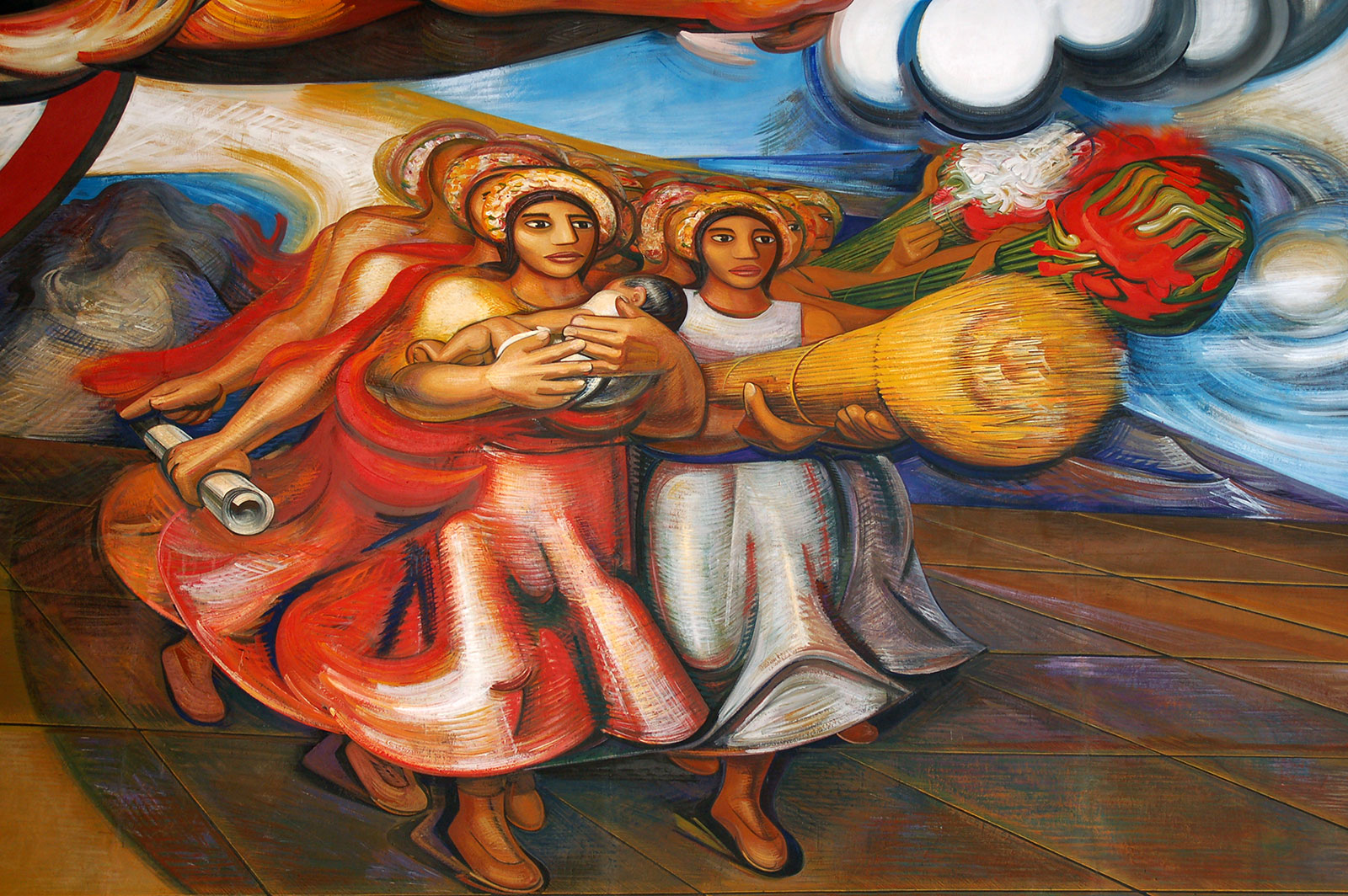 Toward the beginning of the film there is a quote: “Art has to capture the struggle of our people.” This idea resonates throughout Siqueiros’ life and art. How has this idea influenced your artistry and the making of your prior film Ulises’ Odyssey?

Siqueiros’ idea that “art has to capture the struggle of our people” has influenced my work greatly. As people of color artists living in these unprecedented times, it is imperative that we create art that captures our own voices so that our histories are not misrepresented, erased, or forgotten. For many years, others have told our stories and created damaging stereotypes of our people.

This has led to the wide racial profiling and criminalization of people of color that we see today. It is hugely important that we tell the story of our people so that future generations understand history without the racist stereotypes that twist the truth.

In Ulises’ Odyssey, you try to recover and heal past traumas. Through this film, you try to re-remember Siqueiros’ history as the influential muralist that he is. Memory seems to be a theme within your film. Could you talk about this more?

Recently, I’ve been thinking a lot about memory. On a personal level, I’ve lost two of my loved ones to COVID-19, my father and my aunt that helped raise me, both featured in my film Ulises’ Odyssey. I’ve come to realize that it is memories of the past that make us who we are and remain with us for the rest of our lives. Ulises’ Odyssey helped me understand the importance of memory and especially collective memory. How we remember our recent historical past will shape how history will be written so that future generations, hopefully, will not commit the same mistakes.

Siqueiros was one of the most influential artists of the 20th century but has been mostly forgotten from Eurocentric art history books, probably because of his politics. Very much like the story of Siqueiros’ Los Angeles mural "America Tropical," he was censored and long forgotten by many. I hope our film recognizes his place in the art history of the 20th century, where he rightly belongs.

What have been your impact and distribution strategies for Siqueiros: Walls of Passion, especially in light of COVID?

With the current pandemic going on, normal distribution strategies for the film are totally being reevaluated right now. The film was in the midst of its successful festival run in March when the pandemic hit. Four festivals where the film had been selected were either canceled, postponed, or have gone virtual. For example, the San Diego Latino Film Festival is doing a virtual screening of the film on September 18th, just before its broadcast on September 20th.

I had a dream of showing the film in museums and projecting it for free on walls in public spaces, but unfortunately, that will have to wait. Right now, I’m taking one step at a time and looking forward to the PBS WORLD broadcast.

Currently, I am looking for a distributor. I’m also planning on producing a Spanish version to distribute in Europe and Latin America.

Do you have any advice for young filmmakers?

My advice for young filmmakers is to never give up and to follow your passion until the finish line. Documentaries take a long time to make, seven years on average for a feature documentary. Think of it as a marathon, not a sprint.

Believe in yourself and in your vision, always, even in the hardest of times. Feedback can be brutal sometimes, so listen to those that can give you constructive criticism and respect your vision. No matter what, always tell the story you want to tell.

Kristal Sotomayor is a bilingual Latinx filmmaker, festival programmer, and freelance journalist based in Philadelphia. They serve as the Programming Director for the Philadelphia Latino Film Festival and Co-Founder of ¡Presente! Media. Kristal is in post-production on Expanding Sanctuary about the Latinx immigrant community in Philadelphia.