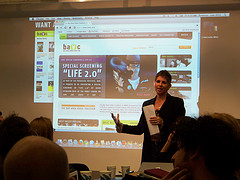 Filmmakers, do you know your alternate reality from your augmented reality? If not, you may want to get a glimpse into the future of documentary film by checking out what’s going on at The Bay Area Video Coalition's Producers Institute for New Media Technologies. The Producers Institute is a 10-day residency for independent producers who, in collaboration with teams of strategists, technologists, and NGO partners, develop and prototype multi-platform projects related to their documentary projects. Now in its fourth year, the Producers Institute has gained recognition as an incubator for cutting-edge content and thought leadership in public and social interest media. That's why we're especially excited that four producers are participating this year with projects related to their ITVS-funded films: Pamela Yates, Granito (Open Call, 2009); Roland Leguiri-Laura, To Be Heard (Open Call, 2008); Nicole Newnham and Maren Grainger-Monsen, The Revolutionary Optimists (Open Call, 2009); and Jehan Harney, Dream of America (Diversity Development Fund, 2008).

This year, ITVS staffers were lucky enough to attend some of the events and activities, including the day of final presentations. By then, producers’ eyes were bleary from a full week of non-stop brainstorming, whiteboarding, designing, wire-framing, and developing their prototypes. Despite the frenetic schedule, the producers presented some impressive work that ranged from the aforementioned alternate reality and augmented reality game prototypes, to geo-targeted mapping projects, to mobile social applications, and much more. Videos of the final presentations should be posted soon, but to learn about the specific project proposals, you can click here. To get a re-cap of the week from the archived Twitter feed and to see more pics, click here.

If you’re not quite sure how these new technologies are integrated into a documentary film project, one example is BAVC Producers Institute alumni and ITVS-funded producers’ The Returning Home Project , an interactive media and story-sharing site created by Gita Pullapilly and Aron Gaudet producers of The Way We Get By. 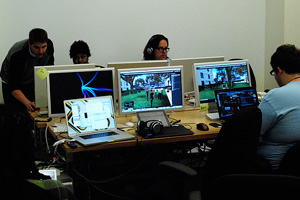 Wendy Levy, director of the Institute, has continued to grow the program in dynamic ways that recognize the needs of mediamakers to further develop and sustain their projects. This year, representatives from NGO organizations were added to the teams to provide an added perspective of community engagement and potential partnership.

As consumers multitask on multiple screens, there are multiple opportunities to interact and engage with them; but there are also more distractions and more competition for their attention than ever. That’s why the Institute’s strategy sounds like a recipe for success: combining — in one room, for one intense week — great social-interest storytellers, NGO organizations with deep links to communities, and technologists who understand the new tools to reach and engage with those communities. Or maybe it sounds like the plot for a great new reality show – augmented or otherwise.