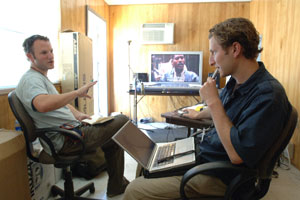 Filmmakers Nick Francis and Mark Francis revisit their documentary Black Gold, which will air on Global Voices this Sunday, July 18th on PBS WORLD. The documentary traces one man’s fight for a fair prices of coffee in an eye-opening expose of the $80 billion coffee industry.

A few weeks ago, we met up with Tadesse Meskela the main character in Black Gold who was in London for a coffee trade show.  He said “every week people contact me from around the world after seeing the film – they want to buy coffee directly.” While Black Gold has been on release internationally since 2006, we continue to receive emails all the time from people who want to arrange screenings or who have recently seen the film. People often say that they hadn’t questioned the story behind their instant cup of Nescafé or their Frappucino at Starbucks. This ongoing feedback underlines how critical it is to ensure that the issues of trade justice don’t slip off the international agenda.

Climate change has captured the attention of the world’s media as the main issue of our day, but it is equally important to remind people of how inextricably linked we are to a punitive international trading system that works for consumers but not for producers. You might be reading this on a laptop (which relies on coltan from the Democratic Republic of Congo) while drinking coffee (from underpaid workers in Ethiopia). In both cases the producers might be being paid just enough to survive. This might be a feature of our globalized world but it doesn’t have to become an unquestioned fact of life.

In Black Gold, Tadesse, who represents more than 100,000 coffee growers, is emphatic that “awareness is the first step to change.” To continue this awareness raising and to support all those who want to take action after seeing the film, we’ve decided to create the Black Gold Foundation. We’re currently inviting sponsors to support the foundation with a plan to launch it later in the year. It was while making Black Gold back in 2005, that we conceived the idea for the second film in our trilogy on Africa. In rural Ethiopia we met some Chinese construction workers building a road and as Marc speaks Chinese, we had a fascinating conversation.

This encounter provoked our curiosity and lead us on a three year journey that became our second feature-documentary called When China Met Africa made in co-production with the BBC and ARTE. The film looks at the most significant geo-strategic shift of our age – China’s growing influence in Africa. We chose to tell this complex story in microcosm, through the lives of three characters in Zambia. It changed the way we see the continent and by extension — the world. We’ve recently started work on the third film in our trilogy about illicit financial flows, but more on that later....