The Girl Scouts of the USA is a major partner for the Women and Girls Lead campaign and last week, they invited ITVS to be a part of their National Convention in Houston, TX. Celebrating the launch of their 100th anniversary activities, the Girl Scouts announced that 2012 will be The Year of the Girl! Women and Girls Lead presented two campaign films: Strong! and Pushing the Elephant, and trained more than 100 girls to use digital storytelling tools. Today’s post from ITVS National Engagement and Education Manager Annelise Wunderlich highlights the digital storytelling trainings. 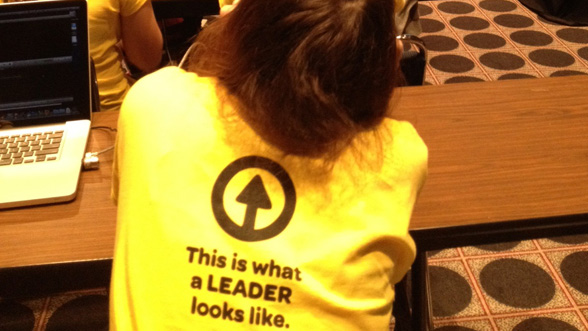 I have a confession: I was never a Brownie, or a Daisy, or a Girl Scout. In fact, as a girl in grade school I suspected those groups of not being "cool," and I was intimidated by their uniforms covered with mysterious and colorful badges. Now, that was admittedly a very long time ago — and the Girl Scouts has surely evolved as an organization since then. But nothing prepared me for just how cool the Girl Scouts actually are. I could imagine what kind of impact our screenings would have — I work for the engagement team that hosts Community Cinema film screenings around the country, after all. But I had a hard time picturing what we could accomplish with training Girl Scouts how to use video and editing technology in just two 90 minute sessions over the course of two days.

Media mavens My colleague, production coordinator N'Jeri Eaton, is an editing pro and an experienced youth media instructor — so that was a plus. Filmmakers Julie Wyman (Strong!) and Elizabeth Mandel (Pushing the Elephant), who were at the convention with us to present their films, were on hand to co-facilitate the sessions. We were also fortunate to have Houston media producer Linda Gibbs and her advanced media production students from Hightower Academy come help. Add to the mix local independent filmmaker Michelle Mower and Houston PBS’s Julie Coan and we were in pretty good shape.

The sessions were a huge success. The girls picked up the little HD cameras and figured out how to use them in no time. We taught them the basics of getting good interviews and the elements of a compelling story. N'Jeri transformed them all into editing whizzes with iMovie, and we were all impressed by how quickly these digital natives adapted to tools they had never used before. We sent them out in the cavernous convention halls to interview other women and girls about why they love the Girl Scouts.
The answers they captured were diverse and surprising. A girl from Japan said she loved the opportunity to connect with girl scouts from around the world. Many talked about service projects that made a real difference in their communities. And several mentioned that the cookies (while delicious) are not what the Girl Scouts is all about.

As a result of these workshops, these girls are going back to their communities with the know-how to tell their stories and share them, and for some, with a growing interest in media making as a career! Here are some of the participants, talking about the experience in their own words:

I wish I had been cool enough to be a Girl Scout way back when.