From November 25 to December 10, Women and Girls Lead joins its partners in 16 Days of Action to eliminate gender-based violence. The 2012 global campaign focuses on the effects of militarism on women and girls. 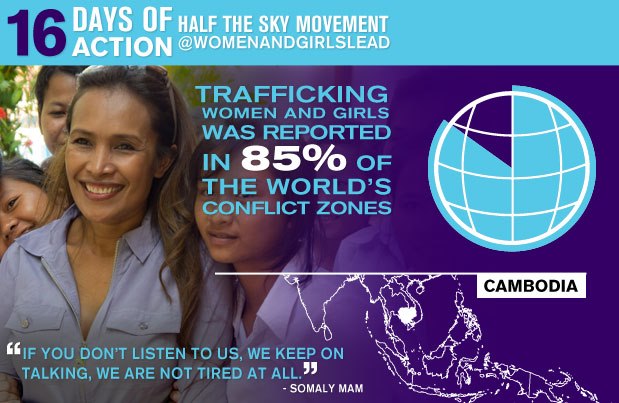 Violence against women and girls is a global crisis that cuts across all countries, classes and cultures, touching the lives of women and girls in every community. According to the United Nations, approximately one out of every three women worldwide has been beaten, coerced into sex, or otherwise abused in her lifetime. Violence prevention is a central issue in the Women and Girls Lead campaign and many of our partners. Each year, we join efforts in a 16-day, all-out activism blitz to put gender-based violence into the public spotlight. The 16 Days of Action to eliminate violence against women kicks off on November 25th, International Day for the Elimination of Gender-Based Violence, and ends on December 10th, Human Rights Day. More than four thousand organizations from 172 countries have participated in the campaign since it launched at the Center for Women’s Global Leadership (CWGL) at Rutgers in 1991. Women and Girls Lead is one of them, offering films that amplify the stories of survivors and educate the public about the factors that contribute to violence. 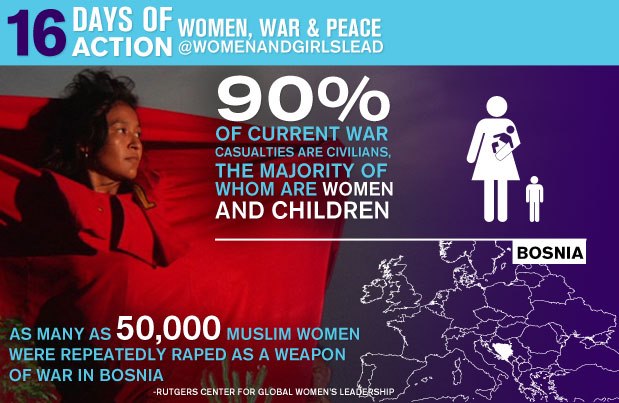 CWGL focuses this year’s theme on the links between gender-based violence and militarism. Violent conflict often has grave consequences for the safety and security of society as a whole, but war zones breed particular forms of sexual violence, human trafficking, and disempowerment that target women and girls long after the conflict ends. The Women, War & Peace series confirms exactly that. Five films, all available to watch free online, challenge the conventional wisdom that war and peace are a man’s domain. Individuals can take action by hosting a viewing party and following the Peace is Loud network on Facebook. Ten-minute tutorials from the Half the Sky: Turning Oppression into Opportunity Worldwide curriculum take viewers to two post-conflict regions to meet advocates working on the ground to decrease violence. In Sierra Leone, where years of civil conflict tore apart the country’s infrastructure, gender-based violence goes largely unpunished. In Cambodia, both military and peacekeepers contributed to one of the worst sex trafficking hubs in the world. Individuals can become part of the solution in by hosting a salon screening of the series to spark discussion and make a commitment to take action with the Half the Sky Movement. 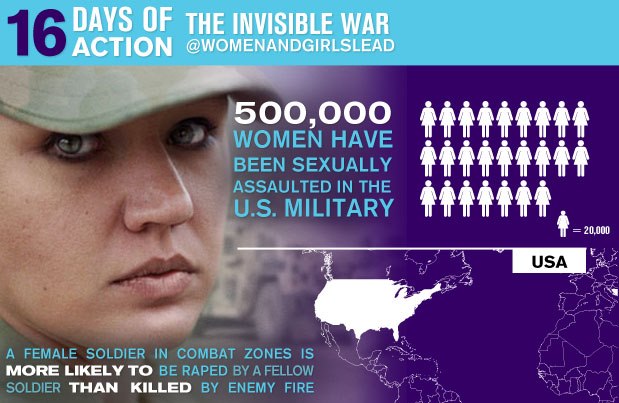 Perhaps the most shocking film in the 16 Days of Action line-up is The Invisible War, a new investigative documentary that exposes the epidemic of rape within the largest military organization in the world: the U.S. military. Get involved with the Not Invisible campaign to help end sexual assault in the military and provide support to our military personnel affected by the epidemic. Throughout the 16 Days of Action, we’ll be sharing the facts, films, and infographics on Women and Girls Lead Facebook and Twitter pages. Help us spread the word by sharing the posts and visiting womenandgirlslead.org to find more ways to participate in the campaign.