When Women, War & Peace debuted on PBS in Fall 2010 as the first pillar program of the Women and Girls Lead campaign, it took the country by storm. Screenings, house parties, workshops, and community discussions opened many American eyes to the atrocities that women and girls endure in areas of war, but also how essential women are to bringing about peace and forging new international laws governing conflict. In March, the series will continue to enlighten as one of 10 films featured online during the #SheDocs Online Film Festival. 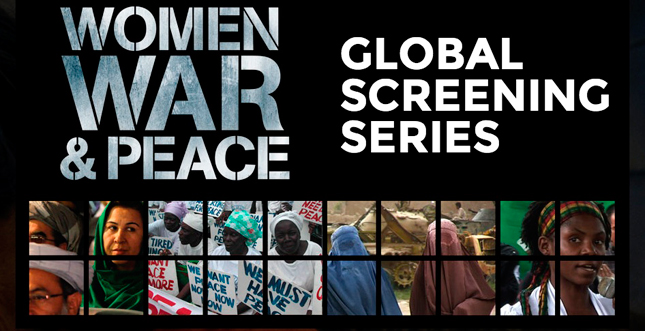 Fork Films and THIRTEEN have partnered with Peace is Loud to create the screening kits for use around the world. The kits include the five films in the series (each an hour long) and a new discussion and resource guide featuring interviews with key figures from the series. The films and guide are available in Arabic, English, French and Spanish. Visit peaceisloud.org to read more and request kits.

Women's mobilization in society is key to ending violence and establishing a culture of peace. You can host a screening series featuring Women, War & Peace and become a part of a global community of activists for peace and justice.

Women, War & Peace is a five-part documentary film series that challenges the conventional wisdom about war. It proposes a basic question: What if we looked at war through women’s eyes? In five films, Women, War & Peace takes audiences to Bosnia, Liberia, Afghanistan and Colombia to report the stories of women in hotspots all over the world.

For more information, check out the trailer and visit womenwarandpeace.org.