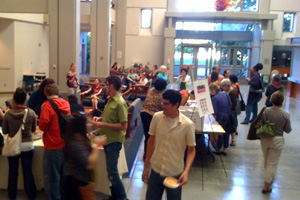 National Community Cinema Coordinator, Patrick Baroch, reports out on another successful Women’s Empowerment Screening, this one, from Seattle. Seattle's first ever Women Empowerment Film Event & Meetings (WE FEM) packed in men and women along a broad spectrum of ages, genders, and ethnicities. Seattle University hosted the event at Pigott Hall, where the power of the films resonated in lively and impassioned discussion afterwards.

After the screening of A Girl's Life the blunt question, "Why are girls so mean?" became a topic of much discussion and observation. The hit of the night was a Lieutenant from the Seattle Fire Department donning her full gear in 60 seconds. She also gave a fascinating tour of her tool belt. After each film and workshop, the participants mingled in the atrium. At the end of the night, people continued to talk about what they had seen.