The GM factory's closure and a showdown at the state capitol impacts of the economic crisis on the people of Janesville, Wisconsin. 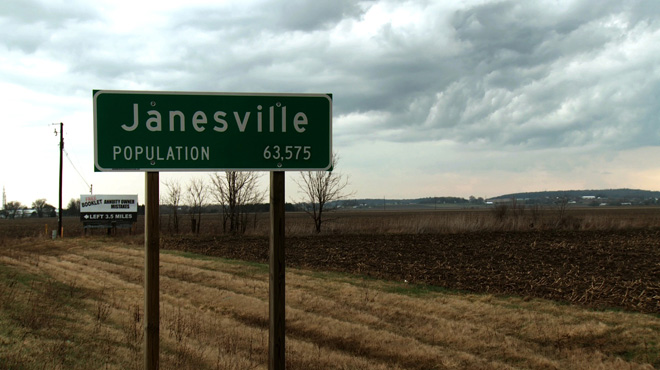 Brad Lichtenstein is an award-winning filmmaker and president of 371 Productions. He’s won two Dupont Awards: one for the recent Al Jazeera America series Hard Earned (produced by Kartemquin Films) and another for his 2001 film Ghosts of Attica (produced with Lumiere Productions). His first virtual reality film, Across the Line, about accessing… Show more abortion amid hostile protests, premiered at Sundance in 2016. His 2012 movie As Goes Janesville (PBS/Independent Lens) was nominated for a News & Doc Emmy. Penelope, his film about a nursing home that performs The Odyssey from Penelope's point of view, aired on PBS in 2015. 371’s Wisconsin's Mining Standoff, premiered in June 2014 on Al Jazeera America's Fault Lines and streams on Al Jazeera English. He’s the executive producer of "Precious Lives," a radio/podcast and print series about young people and gun violence. 371’s tech projects include BizVizz, a corporate accountability app available for iPhones. 371 has also produced American Reckoning, a feature doc about unsolved civil rights era murders, There are Jews Here, a feature doc about disappearing Jewish communities, and When Claude Got Shot, a feature doc about race and gun violence in America. Brad’s also produced for FRONTLINE and Bill Moyers. His work is supported by Bader Philanthropies, Blue Mountain Center, Creative Capital, the Fetzer Institute, The Forward Fund, ITVS, the Ford, HKH, MacArthur, Nathan Cummings, Retirement Research & Tides Foundations, as well as the IDA and Mary L. Nohl Fellowship. Brad is the founder of docUWM, a documentary program at the University of Wisconsin-Milwaukee. Show less

Other ITVS Films
Almost Home
Caught in the Crossfire - Arab Americans in Wartime
When Claude Got Shot
With God on Our Side: The Rise of the Religious Right in America, 1950-1994

As Goes Janesville is a verité documentary that records two years in the lives of laid-off workers, business leaders, and elected officials all trying to reinvent their lives and their midwestern town amid the closure of their GM plant and America’s worst economic crisis since the Great Depression. The story begins shortly after the factory closed in 2008 and continues through a standoff between the newly elected governor and 14 Democratic state senators, one of whom is a main character in the film.

The film also follows Cindy Deegan, a factory worker going back to school to train for a non-union job that pays a third of her former wage — a job she must land before unemployment benefits expire. Gayle Listenbee and Angie Hodges both leave family behind to follow their union jobs with GM plants to other states. The film goes behind the scenes with business leader Mary Willmer-Sheedy as she co-chairs a private economic development initiative that is supported by the governor in an effort to woo companies to town. We also see the crisis through the eyes of Tim Cullen from the moment he first tries to persuade GM to return to town until he is elected to the state Senate as a Democrat and eventually, flees the state to stop the governor’s anti-union initiatives.

Both a microcosm of America’s economic crisis and a deep immersion in the country’s tug-of-war over labor relations, As Goes Janesville offers critical insight and heart wrenching humanity as the United States enters an election season that has already engulfed the nation in an inflamed and polarizing fight over how we should realize the American Dream, if we can realize it all.