In the future, an injured soldier returns home with prosthetics to replace an arm and leg lost in combat and must reconnect with family. 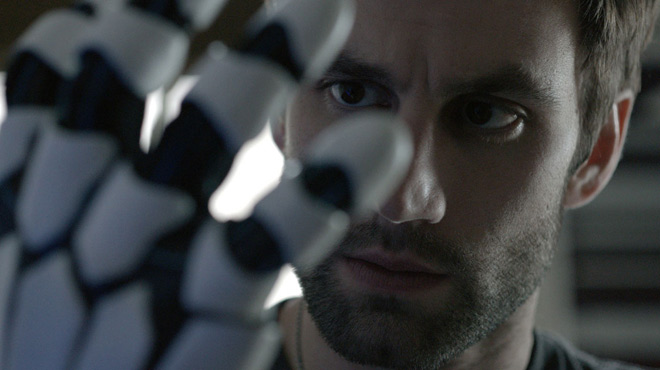 Born in a small Texas town, Trevin Matcek has made movies since he was 10 years old. Trevin is a graduate of the University of Southern California’s School of Cinematic Arts production program. His first 35mm short Sylvia won the Gold Award for Best Student Short at Houston Worldfest, played over a dozen festivals around the world, and aired on Showtime.… Show more After working several years in post-production, Trevin began directing and editing music videos for bands such as Spoon and Clearlake. His video “The District Sleeps Tonight” for The Postal Service, was Fuse TV’s #3 Video of the Year and nominated by the Music Video Production Association for Best Video under $10,000. Trevin has worked on campaigns for NFL Sports, Sony’s PS3, and Cisco Systems. As part of the Dublab Collective, the director has helmed Vision Version videos for artists Hecuba, The Excepter, and Baby Dee. He has collaborated in visual effects for films such as The Avengers, Battleship, and Oblivion. ITVS and PBS commissioned him to write and direct an episode of their groundbreaking series Futurestates. Titled Life Begins at Rewirement, the short premiered at Tribeca Film Festival and stars Barry Del Sherman (There Will Be Blood), Jill Andre (The Master), Tok Olagundoye (ABC’s The Neighbors) and David (Gruber) Allen (Freaks & Geeks). Show less

An Tran is a graduate of the University of Southern California School of Cinematic Arts and a Film Independent Project: Involve Fellow in writing and directing. She has produced music videos for the Dublab Collective, Spoon, Clearlake, The Postal Service, and The Exceptor. Her production credits include Things We’ve Made; You, Me & We; Sylvia; Sundance Shuffle;… Show more and Mad Girl’s Love Song. As a journalist, Tran’s articles and interviews have appeared in American Cinematographer, Filmmaker, Exposure, In Camera, Videography, and the Los Angeles Times. Show less

In the near future, an injured soldier returns home with advanced prosthetics to replace an arm and leg lost in combat and must reconnect with family.