As one of the 20,000 Americans who lost their fathers in Vietnam, a daughter embarks on an intense, personal journey to reclaim the memory of her father, who died in the war when she was an infant. 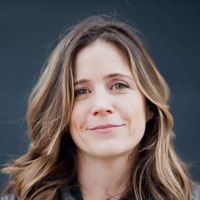 Tracy Droz Tragos is an award-winning independent filmmaker. Rich Hill won the Grand Jury Prize for U.S. Documentary at the 2014 Sundance Film Festival, as well as Best Film at Michael Moore’s Traverse City Film Festival, Best Direction Award at the Sarasota Film Festival, Best Heartland Film at the Kansas City Film Festival, and Best Generation Next at… Show more the Documentary Edge Film Festival. Before its Independent Lens broadcast, Rich Hill was released theatrically in over 80 markets across the United States. Tragos’s first film was Be Good, Smile Pretty, a powerful documentary about the profound and complicated feelings of loss caused by the deaths of American men in the Vietnam War, some thirty-five years later. The film aired on Independent Lens and won the 2004 Emmy for Best Documentary, as well as The Jury Award for Best Documentary at the Los Angeles Film Festival, and a Cine Golden Eagle Award. Tragos participated in a year-long engagement campaign reaching thousands of veterans and their families. Tragos is currently in production on two documentaries that focus on the challenges facing girls in America: one from the perspective of a vulnerable teenage mother and her son in the Midwest; the other from the perspective of girls at a private school in Brentwood, California, who are being groomed to be leaders. Tragos’s work has received support from the Sundance Institute, the John D. and Catherine T. MacArthur Foundation, ITVS, and others. She is a Film Independent Documentary Lab and Sundance Lab alumnae, participating as both a director and a producer. In 2014, Tragos was one of six filmmakers invited to participate in Sundance’s Women Filmmakers Initiative. Tragos holds a B.A. in writing in fiction from Northwestern University and an M.F.A. in screenwriting from USC. Show less

Chris divides his time between narrative film, documentaries, and teaching. He is executive director for the Humanitas Prize, an annual writer's award that celebrates films and television shows that not only entertain, but also enrich the viewing public. His most recent feature film, Straight Right premiered at the 2000 Los Angeles International Film… Show more Festival and aired on the Sundance Channel. In 1998, Chris was honored with an Academy Award for the Best Live Action Short Film, Visas and Virtue. He has taught at the American Film Institute and Loyola-Marymount University. He was co-producer on the feature film Entertaining Angels: The Dorothy Day Story, starring Moira Kelly and Martin Sheen. Chris serves is a member of the Academy of Motion Picture Arts and Sciences and holds graduate degrees from the American Film Institute and the Jesuit School of Theology in Berkeley, California. Show less

On March 16, 2001, 32-year-old Tracy Droz Tragos typed her father's name into Yahoo.com and hit 'Search.' Two and a half years later, the results of that search are chronicled in Be Good, Smile Pretty, a film that documents Tracy’s journey to find the father she lost in Vietnam. Lt. Donald Glenn Droz was 25 when he died; Tracy was three months old. What she found on the Web that night was "Death of the 43," a first-person, detailed account by a witness to an ambush in the Mekong Delta that destroyed a Navy swift boat and killed six men, including her father. After waiting two days, Tracy called her mother to tell her of the article. Thus began a conversation between the two on film, with Tracy gently but insistently probing her mother, Judy, to dredge up and piece together old memories and to flesh out and give life to the shadowy figure of her daughter's dreams.

Tracy's film odyssey takes her from Berkeley, California to Rich Hill, Missouri, her father's hometown, and then on to the United States Senate, the United States Naval Academy, the cotton fields of Selma, Alabama, suburban Illinois, New York City, Santa Rosa, California, and places in between, to talk with relatives and her father's comrades from Vietnam. These men (including Senator John Kerry of Massachusetts), now in their 50s and 60s, are the age her father would have been had he survived. Grappling with their own painful memories, they have stories they need to tell about her father, to make a connection, to provide missing pieces of the puzzle.

Haunting, evocative and moving, Be Good, Smile Pretty is a testament to the terrible loss that accompanies war, and the grief that continues to resonate for decades to come. But this time, Tracy has rewritten the ending to the story: "While I will always want more, one more second, one more breath, one more anything of him — for the first time in my life, I have just enough of him to remember and love and grieve. He would have been a great father. And when I smile, I have his eyes."