Two childhood friends from Midland, Texas fall under the sway of a charismatic revolutionary who leads them down a path that changes their lives. 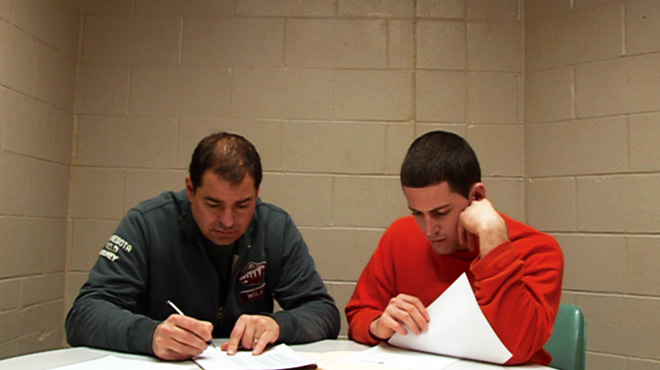 Kelly Duane de la Vega is an award-winning filmmaker whose work has screened at film festivals worldwide, opened theatrically across the country and broadcast nationally on PBS and the Documentary Channel. Since founding Loteria Films in 2001, Duane de la Vega has directed and produced three documentary features, multiple documentary series, and… Show more hundreds of short format pieces for television and the web. Duane de la Vega won the Writer’s Guild of America’s Best Documentary Screenplay Award, Gotham Independent Film's Best Documentary Award and an IDA Creative Achievement award for her filmBetter This World (POV 2011 & 2012), the story of two young friends from Texas accused of domestic terrorism and their relationship with an older, radical-militant mentor and undercover FBI informant. The film premiered at SXSW, was selected for New York MoMA’s documentary fortnight and is being developed as a fiction film. Duane de la Vega's groundbreaking, Emmy-nominated Monumental: David Brower's Fight for Wild America opened theatrically across the United States, broadcast on The Documentary Channel, and was acquired by the Smithsonian for its permanent collection. A recent Sundance, HBO, and Film Independent Fellow, Duane de la Vega began her career in Fine Arts Photography before moving into film, where her early work (See How They Run and Monumental) was shaped by close collaborations with renowned experimental filmmaker Nathaniel Dorsky. With her latest feature docs (El Poeta, The Return and Voting Wars), Duane de la Vega continues to generate innovative short format work for The New York Times Op-Docs, Mother Jones, IFC and others. With Katie Galloway, she teaches Documentary Forms at the University of California at Berkeley. Show less

Other ITVS Films
The Return

Katie Galloway is a documentary director, producer and writer whose films explore the intersections of institutional power, civil and human rights, and political activism. Galloway, who joined Loteria as co-head in 2009, won the 2012 Writer’s Guild of America’s Best Documentary Screenplay Award for Better This World, which, after premiering at SXSW,… Show more also went on to win Best Documentary at San Francisco International and Sarasota Film Festivals, the Gotham Independent Film Award’s Best Documentary Prize, and an International Documentary Association Creative Recognition Award, among others. It is currently being developed as a narrative feature. Galloway’s feature documentary Prison Town, USA broadcast nationally on POV/PBS and was developed as a fiction television series by IFC, for which Galloway co-wrote the first three episodes. Galloway produced and reported an award-winning trio of films on the American criminal justice system for PBS FRONTLINE: Snitch, Requiem for Frank Lee Smith and The Case for Innocence. A two-time Sundance Fellow and recent HBO/Film Independent Documentary Fellow, Galloway taught documentary production at Columbia University’s Graduate School of Journalism and now teaches Documentary History and Theory at UC Berkeley. In addition to teaching in Media Studies at Berkeley, she was recently made “Filmmaker in Residence” at the Graduate School of Journalism’s Investigative Reporting Program. A Ph.D. in Political Science (UC Berkeley, 2012) with specialties in Political Psychology and Public Law, Galloway’s films in production include a look at the U.S. roots of the Mexican Drug War, an examination of an unprecedented experiment in criminal justice reform unfolding in California with profound national implications, and an investigation of the ongoing battle over who gets to vote in America and why, timed for release at the 50th anniversary of the Voting Rights Act in 2015. Show less

"Get ready – because we're going to shut this f---er down!" These were the words spoken by charismatic revolutionary Brandon Darby, 32, as he prepared David McKay, 22, and Bradley Crowder, 23, of Midland, Texas for protests at the 2008 Republican National Convention. With a wounded cowboy charm, Darby told his star struck protégés activist war stories — from tangling with Middle Eastern gun runners to rescuing victims from the toxic waters of Katrina. Over more than eight months leading up to the convention, Darby was coach and mentor to the young men — training them in fighting techniques to engage police, relaying romantic stories of Molotov-throwing anarchists, and pumping them up for what he promised would be serious political action in Minneapolis. "Direct action is intense – and anyone who comes with me is going to be successful. I'm not f***ing around!"

But what Crowder and McKay didn't know was that Darby was an FBI informant. And on the eve of the convention the young men, both political neophytes with no criminal records, were busted for making and possessing eight Molotov cocktails. Each faced multiple federal terrorism charges and decades in prison. Darby, until then their mentor, would be the government's star witness against them.

Using the trial as a backdrop and dramatic narrative, Better This World untangles a web of questions: Why did the government spend nearly eight months following political naïfs with no criminal history? Why did their informant Brandon Darby, who was to be "eyes and ears only," seem to become their leader? Why did these all-American boys from Midland build eight bombs? Better This World probes these questions and more as it paints a gripping portrait of the strange and intriguing odyssey of these young men.