The Collaborator and His Family

In this cinema verité film, a Palestinian family is torn apart by its patriarch's collaboration with Israel. 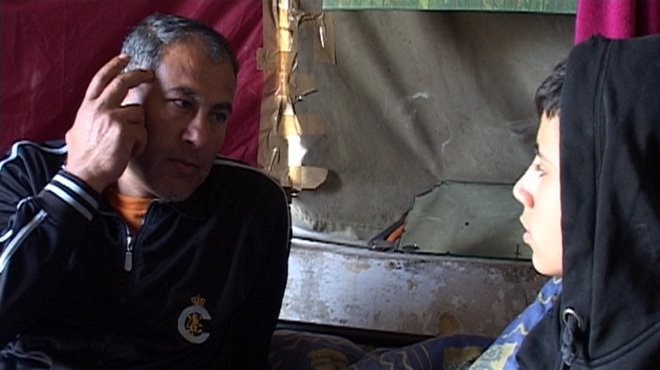 Adi Barash is the director, producer, and cinematographer of the award-winning feature documentaries Diamonds and Rust and Garden, as well as Yuri Foreman, the Next Jewish Boxer. Barash is currently filming and co-directing a six-part documentary series called The Healers about five residents at the largest and most prestigious hospital in Israel.… Show more Barash is also developing several projects including Dust Ball, a narrative feature about a young Jewish boy's childhood in Harlem of the 1970s. Show less

Ruthie Shatz is the director, producer, and editor of the award-winning feature documentaries Diamonds and Rust, Garden, and Yuri Foreman, the Next Jewish Boxer (producer, editor). She is currently co-directing and producing a six-part documentary series called The Healers about five residents at the largest and most prestigious hospital in Israel.… Show more Shatz is in the preproduction stage of shopping a documentary film dealing with the questions of friendship between middle-aged, power-driven women, and has been a consultant for the Israeli International Documentary Coproduction fund for the past 3 years. Show less

Ross Kauffman is the director, producer, cinematographer, and co-editor of Born into Brothels, winner of the 2005 Academy Award for Best Documentary. Other projects include award-winning feature documentaries In A Dream (executive producer) and Project Kashmir (cinematographer/consulting producer). Kauffman is currently developing projects… Show more including; Penny, a narrative feature about a young Tanzanian house servant; Boy Boy Girl Girl, a comedic narrative feature film about a gay couple eager to become parents, who trying to adopt a newborn baby from a drug-addicted pregnant woman and her abusive lesbian girlfriend; and Wait for Me, a feature-length documentary chronicling the story of a mother's spiritual and emotional search for her son who went missing 23 years earlier while hiking in the mountains of Kashmir, India. Show less

Ibrahim's motivation had always been ideological; he wasn't in it for the money. Forced to flee his native land under an imminent threat of death, Ibrahim escapes to Israel and lives in Tel Aviv alone for seven years while his wife and children stayed behind in the Palestine Occupied Territory, suffering the reflected shame of Ibrahim's reputation as a traitor. When Hamas tries to recruit Ibrahim's eldest son Mohammad to be a Palestinian spy, Ibrahim realizes that the threat of retribution endangers his entire family, and orders them to flee. Under cover of night, the family leaves the Palestinian city of Hebron and escapes to Tel Aviv.

Within hours, the sons and their mother are refugees in a foreign land; whisked away from everything they once knew and transported to a place where nobody wants them. With no legal status in Israel and constantly under threat of deportation back to Palestine, where their lives are in danger, Ibrahim's three sons Mahmud (12), Sufian (16), and Muhammad (17) and their mother, Yusra pay the heaviest price for the Ibrahim's covert actions, branded with a scarlet letter through no fault of their own.

They attempt to cope and assimilate to Israeli society and keep their family together, while suffering the humiliation and loneliness of outcasts in a country not their own.