From Mambo to Hip Hop: A South Bronx Tale

A former symbol of urban decay, the South Bronx is also known as a creative breeding ground and for its enduring cultural spirit. 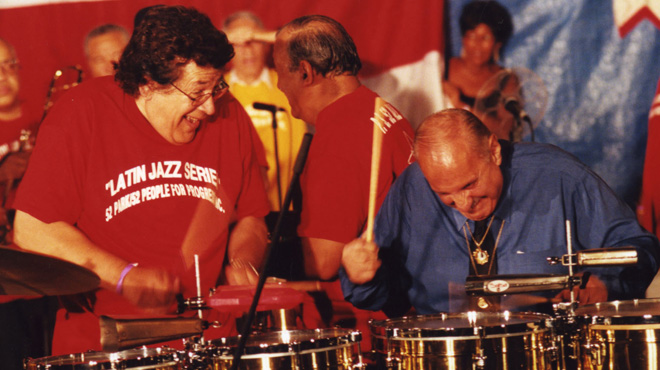 Henry Chalfant studied at Stanford University, where he majored in classical Greek. Later he pursued a career as a sculptor, exhibiting his work in New York and Europe. He turned to photo and film documentation in order to do an in-depth study of hip-hop culture and graffiti art. Exhibits of his photos include the O.K. Harris Gallery and the landmark New… Show more York-New Wave show at P.S. l, and important galleries and museums in Europe. His images of graffiti on NYC trains were included in the Whitney’s exhibition, “An American Century.” His photos are in the collections of the Metropolitan Museum of Art in New York, and the Carnegie Institute in Pittsburgh. Through his company, Sleeping Dog Films, Henry co-produced and handled photo-documentation for the film, Style Wars, first shown on PBS in 1984. He co-produced with Rita Fecher and directed the documentary on South Bronx gangs, Flyin’ Cut Sleeves (1993), and produced and directed music videos for the rap group, The Latin Empire: “Puerto Rican and Proud” for Atlantic Records and “Asi Es La Vida,” chosen as one of the 10 best videos on International MTV in 1990. He recently completed The Carnegie Deli Presents, What a Pickle! (1999), and is currently producing a documentary film, Grand Tour, based on film footage his father shot in 1931 while on a trip around the world. Henry co-authored the definitive account of New York graffiti art, Subway Art (Holt, 1984) and a sequel on the art form’s worldwide diffusion, Spray Can Art (Thames and Hudson, London, 1987). Show less

Steve Zeitlin served as co-producer of From Mambo to Hip Hop, a documentary about the South Bronx funded by ITVS, and broadcast on public television across the U.S. as part of the Voces series of Latino Public Broadcasting. He received his Ph.D in folklore from the University of Pennsylvania, and is the director and cofounder of City Lore, an organization… Show more dedicated to the preservation of New York City’s — and America’s — living cultural heritage. He also co-directs the People’s Poetry Gathering, a national poetry festival in New York City. Steve Zeitlin has served as a regular commentator for the nationally syndicated radio shows, Crossroads and Artbeat, and The Next Big Thing, heard on public radio stations across the U.S. His commentaries have appeared on the op-ed pages of the New York Times and Newsday. He also co-produced (with NPR producer Dave Isay) the storytelling series American Talkers for NPR’s Weekend Edition Sunday and Morning Edition, and serves as an advisor to the StoryCorps project. Prior to arriving in New York, Steve Zeitlin served for eight years as a folklorist at the Smithsonian Institution in Washington, D.C., and is coauthor of a number of award winning books on America’s folk culture. He has also co-produced a number of award-winning film documentaries including How I Got Over; The Grand Generation and Free Show Tonite on the traveling medicine shows of the 1920s and 1930s. His early documentaries were selected by Folkstreams.net for streaming online. Show less

There’s a postage stamp of urban sidewalk known by people of a certain age for having burned to the ground. A more recent generation knows it as the place where hip-hop was born. An older generation remembers the time that this turf produced a New York Latin music sound that came to be known as salsa. From Mambo to Hip-Hop: A South Bronx Tale is an hour-long documentary that tells a story about the creative life of the South Bronx, beginning with the Puerto Rican migration and the adoption of Cuban rhythms to create the New York salsa sound; continuing with the fires that destroyed the neighborhood, but not the creative spirit of its people; chronicling the rise of hip-hop from the ashes; and ending with reflections on the power of the neighborhood’s music to ensure the survival of several generations of its residents, and, in the process, take the world’s pop culture by storm.