A look at the life of one of America’s great women photographers, one of the first staff photographers at LIFE magazine, whose Depression-era photos and commitment to social justice inspired concerned artists everywhere. 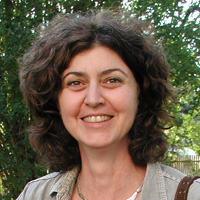 Nancy Schiesari is an Emmy-nominated cinematographer who has shot dozens of documentaries around the world for The Learning Channel, Discovery, ABC, British Film Institute, BBC, and Channel 4. Her most recent project was a profile of Martin Scorsese for BBC 4, which was broadcast in January 2003 to coincide with the release of Gangs of New York. Schiesari… Show more was nominated in 2002 for an Emmy for her work on the television series The Human Face with John Cleese and Elizabeth Hurley. She produced and directed Green Flutes [Channel 4, UK] and “Loaves and Fishes” for The Territory (PBS). Other credits in documentary include The Human Body (1998) for BBC, ABC, and The Learning Channel; Six Degrees of Freedom (1997), profiles of virtual reality designers, for Silicon Graphics; and Warrior Marks (1994) for Channel 4, shot on location in Africa with Alice Walker. In features, she worked on the all-women camera crew of Sally Potter’s first feature, The Gold Diggers (1983) shot in Iceland, and then became a DP on Partition (1988), featured at the Berlin Film Festival and other prestigious festivals, and Poco Loco (1994), with Debra Koons Garcia. She currently teaches cinematography at the University of Texas at Austin and shoots and directs freelance assignments. Show less

Other ITVS Films
Tattooed Under Fire

Hansel Mieth: Vagabond Photrographer is the compelling tale of a pFioneering woman photojournalist who created some of the most indelible images of America mid-20th century. A German immigrant who arrived in this country in the midst of the Great Depression, she rose to become a celebrated LIFE magazine staff photographer. Armed with convictions, perseverance, and talent, Mieth courageously carved out a career in the male-dominated world of photojournalism at a time when very few women were accepted in the profession.

A contemporary and friend of such respected photographers as Imogen Cunningham, Peter Stackpole, Dorothea Lange, Carl Mydans, and Margaret Bourke-White, Hansel Mieth remains one of the great but still undiscovered women photojournalists of this century. During the “golden age of photojournalism” (1930s-1950s), her work appeared in virtually every pictorial magazine in the world. She documented the casualties of social injustice — from Depression-era hardships to the alarming assault on civil liberties in Japanese American internment camps. Yet through her talents as a photographer, Mieth gave her subjects a nobility — a sense that the lives she captured on film had an intelligence and worth few others had noticed.

Filmmaker Nancy Schiesari reveals Mieth’s extraordinary life experiences by intercutting taped interviews and voice-over narration with poetic imagery, both through archival flashback (selected for artistic merit as much as for historical context) and through Mieth’s photographs. The result is a richly woven documentary that places Hansel Mieth as a significant contributor to the cultural context of her time.