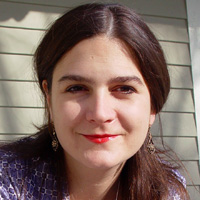 Sasha Waters Freyer is a filmmaker, mother, teacher, reader, amateur dressmaker, crossword puzzle enthusiast, and member of the Horace Mann School PTO. Her experimental and documentary films have featured dominatrixes, coal miners, artists, children, and a penguin, but not necessarily in that order. Her videos and homemade 16mm films have broadcast… Show more and screened widely in the U.S. and internationally, from Ann Arbor to Zagreb, with stops along the way that include the Sundance Channel, the Tribeca, and Woodstock Film Festivals, L.A. Film Forum, the Gene Siskel Center, the National Museum for Women in Arts, Videoex, and Rencontres Internationales Paris/Berlin. She has received grants and fellowships from the National Endowment of the Arts, Humanities Iowa, the Graham Foundation, the Jacqueline Donnet Fund, the Jerome Foundation, the Iowa Arts Council, the MacDowell Colony, and the Corporation of Yaddo. In 2005, Waters Freyer was a finalist for a grant from the Creative Capital foundation. Since 2000, Waters Freyer has taught filmmaking and video production in the Department of Cinema & Comparative Literature at the University of Iowa, where she is an associate professor. She lives in a house with a big front porch in Iowa City with her husband, media artist John D. Freyer, and their daughters Georgia and Ruby. Show less

In the face of thunderous blasting and choking dust caused by mountaintop mining, the last 40 families of Blair, West Virginia stay to fight America's second-largest coal company as it threatens their homes. Razing Appalachia is the story of a remarkable grassroots effort to redefine the role of government and power of corporations over our daily lives.