That Which Once Was

In 2032, a Caribbean boy fends for himself in a hostile Northern metropolis and forms an unexpected friendship with an Inuk ice carver. 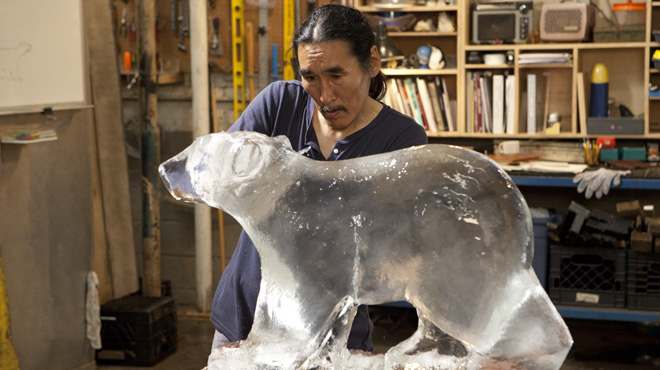 Adriane Giebel’s credits include Michael Moore’s Capitalism: A Love Story and Theater of War, a feature documentary starring Meryl Streep and Tony Kushner. She has produced programs for Sundance Channel, IFC, and Court TV, as well as commercial work for the fashion industry and corporate clients such as Calvin Klein, IBM ,and UPS. She holds film degrees… Show more from Harvard and New York Universities. Show less

Richard Beenen is a New York based artist, photographer, and educator with teaching experience at Parsons School of Design, Pratt Institute, and recently at the Museum of Modern Art, NYC. His fine art work has been exhibited at numerous galleries and museums including the Brooklyn Museum of Art, White Columns/NYC, and Museo D'Arte Contemporanea Roma. He… Show more has received artist fellowships from the National Endowment of the Arts, the New York Foundation for the Arts, the Pollack Krasner Foundation, and the Adolph & Esther Gottlieb Foundation. Beenen has also been a co-producer on numerous award winning narrative and documentary films including, Summer of The Serpent, E=NYC2, Suspended, and the feature length documentary Where Are You Taking Me? which have screened at festivals worldwide including the Sundance Film Festival, Rotterdam Film Festival, Locarno Film Festival, New Directors/New Films, SXSW, and the Museum of Modern Art, NYC. Show less

In the year 2032, Vicente, an eight-year-old Caribbean boy, has been displaced by global warming and fends for himself as an environmental refugee in a hostile Northern metropolis. Orphaned and without connection to family or friends, Vicente now lives in a children’s shelter on the fringes of the city, and struggles with anxiety, rage, and disturbing memories of the tragedy he fled. On a hot summer day, Vicente sits outside the shelter and sees a mysterious man smashing large chunks of ice against the pavement. Thus begins an unexpected friendship between Vicente and Siku, the ice carver: two people from different worlds who have both experienced tremendous loss. Through their bond, Siku ultimately helps Vicente confront his past and understand the value of memory.